It's getting hot in here! Unknown threat group using Hades ransomware to turn up the heat on their victims

The information outlined in this blog is based on collection from CIFR incident response engagements, Open-Source Intelligence (OSINT), and various media reports. This is a developing story; additional details will be released to the community when available.

An unknown threat group is using the self-proclaimed Hades ransomware in cybercrime operations that have impacted at least three (3) victims. Based on collection sources, the threat group has been in operations since at least December 2020 and has continued to target victims through March 2021. Accenture Security also analyzed the group's activities in the context of attribution, victimology, and TTPs employed according to OSINT and incident response data. Accenture Security assesses the group's operations have just begun, and their activity will likely continue to proliferate into the foreseeable future, targeting additional victims.

We are currently aware of 3 victims, all of which are large multi-national organizations with annual revenues exceeding $1 billion USD. The profiles of the three (3) known victims are a strong indicator of Big Game Hunting, with target selection and deployment methods aimed toward high-value payouts. This also may explain the relatively low number of known victims since Hades was first identified publicly in December 2020.

Industries impacted so far based on known victimology include:

Furthermore, we identified additional Tor hidden services and clearnet URLs via various open-source reporting pertaining to the Hades ransomware samples. For all analyzed samples, the ransom notes identified instruct the victim to install Tor browser and visit the specified page. The Tor pages differ only in the Victim ID that is provided, indicating each Tor address may be uniquely generated for each victim. Accenture Security identified a total of six (6) of these addresses, indicating there could be three (3) additional victims we are unaware of at this time. 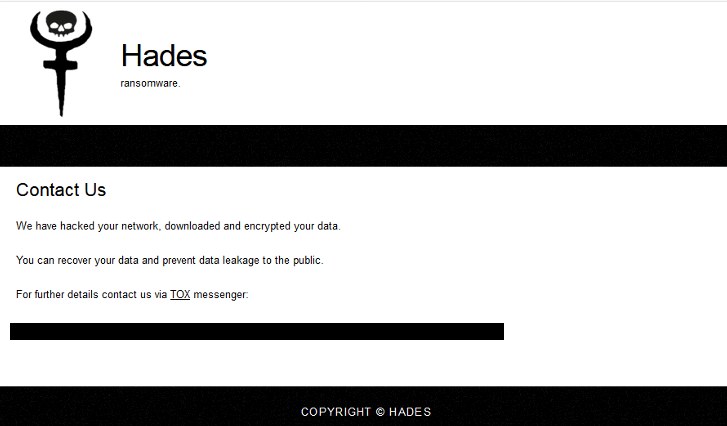 At this time, it is unclear if the unknown threat group operates under an affiliate model, or if Hades is distributed by a single group. Under an affiliate model, developers’ partner with affiliates who are responsible for various tasks or stages of the operation lifecycle, such as distributing the malware, providing initial access to organizations or even target selection and reconnaissance. However, based on intrusion data from incident response engagements, the operators tailor their tactics and tooling to carefully selected targets and run a more “hands on keyboard” operation to inflict maximum damage and higher payouts.

The below provides a high-level summary based on analysis of Hades ransomware samples:

In addition, based on significant code overlap found in Hades samples with other known variants, Crowdstrike assesses that the new variant is a successor to WastedLocker ransomware and possibly linked to Evil Corp operations.

Persistence
The use of legitimate credentials, service creation, and distribution of Command and Control (C2) beacons across victim environments through the use of Cobalt Strike and Empire, so far appear to be the predominant approach used by the unknown threat group to further their foothold and maintain persistence. In addition, the threat actors operated out of the root of C:\ProgramData where several executables tied to the intrusion set were found.

Defense evasion
Impeding defenses was achieved through use of domain administrator credentials and includes the following:

Exfiltration & impact
Prior to deploying Hades ransomware, the unknown threat group has employed the 7zip utility to archive data that was then staged and exfiltrated to an attacker-controlled server hosted in Mega[.]nz cloud infrastructure, leveraging the MEGAsync utility. In addition to data theft, actors deploy Hades ransomware to encrypt files identified on the victim network. Hades operators leverage this approach for "double-extortion" tactics.

We are publishing indicators to help organizations identify both the Unknown Threat Group’s TTPs and the Hades Ransomware variant itself. As this is a developing story, additional indicators will be released, when available.

As mentioned before, it should be noted that the threat actors often operated out of the root of C:\ProgramData where several executables tied to the intrusion set were found.

Accenture Security is a leading provider of end-to-end cybersecurity services, including advanced cyber defense, applied cybersecurity solutions and managed security operations. We bring security innovation, coupled with global scale and a worldwide delivery capability through our network of Advanced Technology and Intelligent Operations centers. Helped by our team of highly skilled professionals, we enable clients to innovate safely, build cyber resilience and grow with confidence. Follow us @AccentureSecure on Twitter or visit us at www.accenture.com/security

Jeff has 20 years of IT experience with a focus on infosec. He is a senior incident response and threat hunt lead on the CIFR team.