Karakurt rises from its lair

The information outlined in this blog is based on information collected from CIFR incident response engagements, threat intelligence insights, open-source intelligence (OSINT) analysis and various media and industry reports.

This is a developing story; additional technical analysis of the intrusion clusters, attacker TTPs and indicators of compromise (IOCs) will be released to the community in a separate blog post.

Accenture Security has identified a new threat group, the self-proclaimed Karakurt Hacking Team, that has impacted over 40 victims across multiple geographies. The threat group is financially motivated, opportunistic in nature, and so far, appears to target smaller companies or corporate subsidiaries versus the alternative big game hunting approach. Based on intrusion analysis to date, the threat group focuses solely on data exfiltration and subsequent extortion, rather than the more destructive ransomware deployment. In addition, Accenture Security assesses with moderate-to-high confidence that the threat group’s extortion approach includes steps to avoid, as much as possible, drawing attention to its activities. 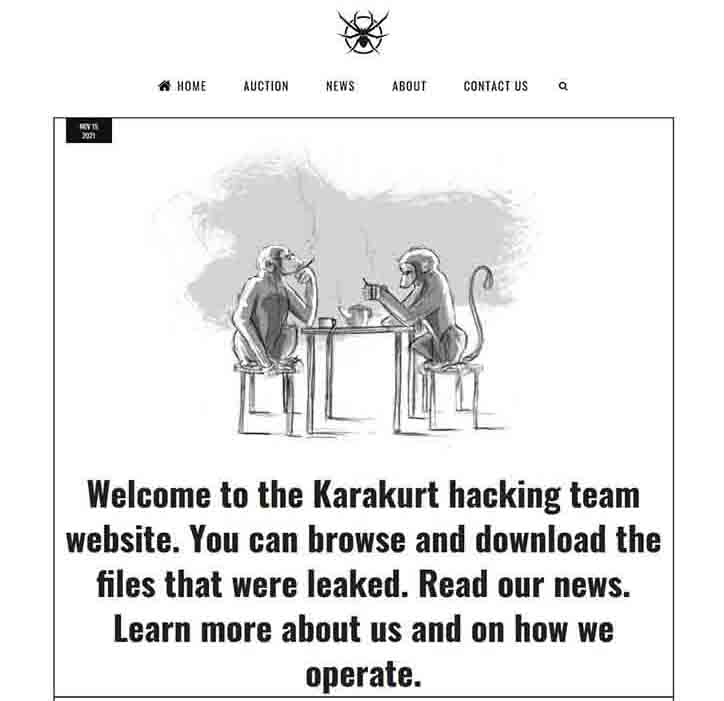 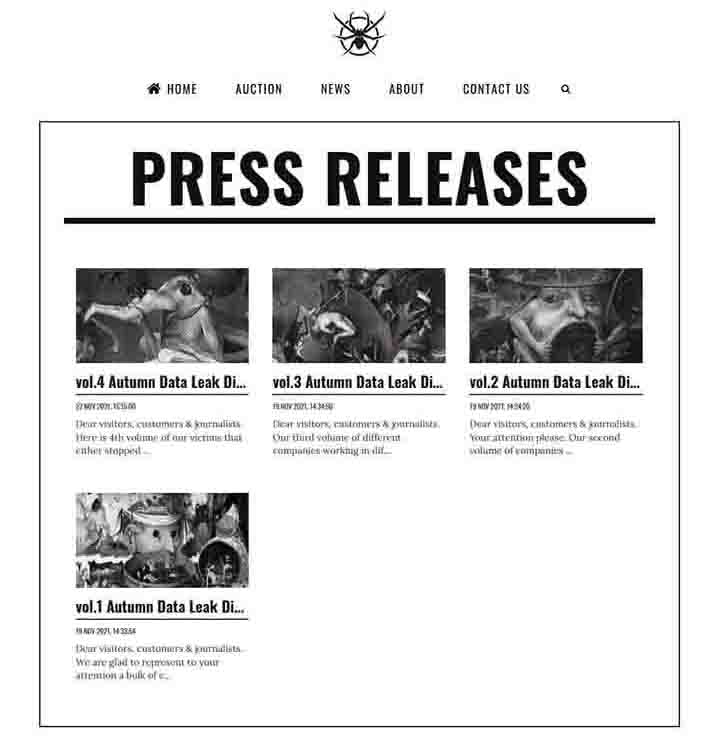 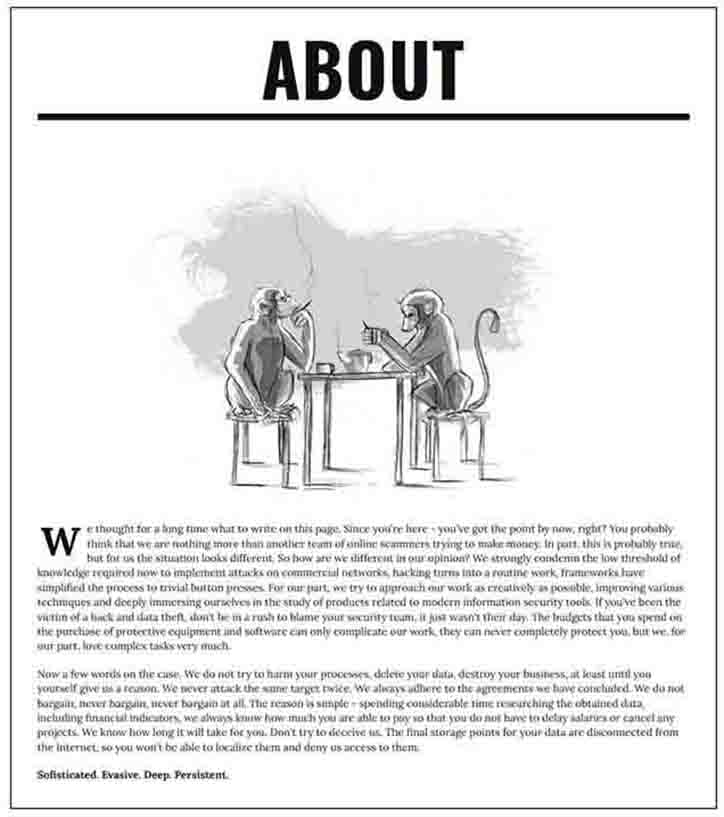 Based on our collection sources, Accenture Security is currently aware of over 40 victims spanning multiple industry verticals and size. The Karakurt group does not appear to focus on a specific industry vertical or size. Of known victims, 95% are based in North America with the remaining 5% in Europe. From our investigations into the group’s activity, we determined that it typically uses credential access as the initial vector into victims’ networks and utilizes applications already installed to move laterally and exfiltrate data, if available. In addition, the threat group will typically contact the victim multiple times, using different communication methods, to apply additional pressure during extortion attempts. Figure 5 includes the known impacted industry verticals to date, based on Accenture Security’s collection sources. 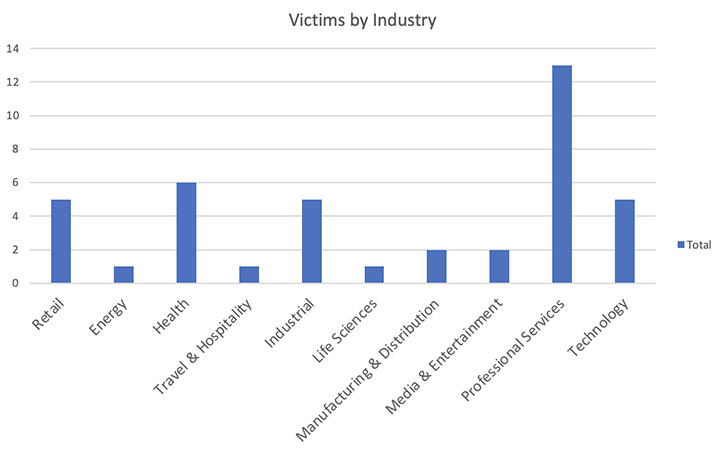 The primary method for initial access into victim networks includes internet-facing systems via virtual private network (VPN) using legitimate credentials. Due to a lack of forensic evidence, it is unclear how the credentials were obtained by the threat group. One possibility is exploitation of vulnerable VPN devices, but all cases included inconsistent or absent enforcement of multi-factor authentication (MFA) for user accounts.

In Table 1 below, Accenture Security noted logons from four different hosting providers, to include the autonomous system that currently hosts the Karakurt group’s blog site.

The use of legitimate credentials, service creation, remote management software and distribution of command and control (C2) beacons across victim environments using Cobalt Strike are the predominant approaches used by the threat group to further its foothold and maintain persistence.

However, in recent intrusions, the threat group did not deploy backup persistence using Cobalt Strike. Instead, it persisted within the victim’s network via the VPN IP pool or installed AnyDesk to allow external remote access to compromised devices. The group was then able to leverage previously obtained user, service, and administrator credentials to move laterally and take action on objectives.

Accenture Security observed the threat group leveraging Mimikatz in at least one intrusion set, as well as PowerShell to dump ntds.dit and exfiltrate it for offline analysis.

However, the threat group appears to escalate privileges using the aforementioned techniques and tools only if needed, typically using previously obtained credentials.

In one intrusion, Accenture Security also observed the threat group avoiding the use of common post-exploitation tools or commodity malware in favor of credential access. This approach enabled it to evade detection and bypass security tools such as common endpoint detection and response (EDR) solutions.

If the threat group’s preferred tools are not present within victims’ networks, it will download common remote management and file transfer utilities via a browser to support subsequent exfiltration activities (e.g., AnyDesk, FileZilla, 7zip, etc.).

The threat group was also observed running internet speed tests via a browser to check for upload speeds before executing exfiltration activities. In addition, the use of Angry IP Scanner was identified in at least one intrusion set.

The threat group has been known to use AnyDesk, or other available remote management tools, remote desktop protocol (RDP), Cobalt Strike, PowerShell commands and valid credentials taken from initial access to move laterally.

In addition to using valid credentials to log into the VPN directly, the threat group has utilized Cobalt Strike for C2 for backup persistence, if needed.

The threat group has been seen utilizing 7zip and WinZip for compression, as well as Rclone or FileZilla (SFTP) for staging and final exfiltration to Mega.io cloud storage.

The staging directories utilized for exfiltration were C:\Perflogs and C:\Recovery.

If you have an incident or need additional information on ways to prevent, detect, respond to, or recover from, cyberthreats, contact a member of our CIFR team 24/7/365 by phone 888-RISK-411 or email CIFR.hotline@accenture.com

Accenture, the Accenture logo, and other trademarks, service marks, and designs are registered or unregistered trademarks of Accenture and its subsidiaries in the United States and in foreign countries. All trademarks are properties of their respective owners. All materials are intended for the original recipient only. The reproduction and distribution of this material is forbidden without express written permission from Accenture. The opinions, statements, and assessments in this report are solely those of the individual author(s) and do not constitute legal advice, nor do they necessarily reflect the views of Accenture, its subsidiaries, or affiliates.

Given the inherent nature of threat intelligence, the content contained in this alert is based on information gathered and understood at the time of its creation. It is subject to change. The information in this alert is general in nature and does not take into account the specific needs of your IT ecosystem and network, which may vary and require unique action. As such, all information and content set out is provided on an “as-is” basis without representation or warranty and the reader is responsible for determining whether or not to follow any of the suggestions, recommendations or potential mitigations set out in this report, entirely at their own discretion. Accenture accepts no liability for any action or failure to act in response to the information contained or referenced in this alert.

The CIFR team helps Accenture’s global clients prepare for, respond to and recover from cyber intrusions and minimize business impact.