Once upon a time in the West

Living on the West Coast of the United States and working in energy does not always go hand-in-hand. I’ve had enough 4 a.m. meetings with my colleagues in Houston to realize that. It can, however, provide you with a preview of the direction that the global energy industry and energy consumers are traveling.

Having spent much of the last year researching and writing articles in the Energy Transition space, I’ve come to realize that those 4 a.m. meetings might just be worth it for the additional insight. Whether it’s the prevalence of electrical vehicles (EVs) and increasing charging infrastructure on your street or the warnings that heatwaves may put extra strain on a grid with high renewables penetration, signs of the energy transition are never far away.

At the intersection of the Energy Transition and transportation, one of the biggest stories to come out of the West Coast in the past five years is the emergence of renewable diesel. Could this finally be the opportunity that oil and gas companies have been waiting for?

Renewable diesel is not biodiesel. In fact, it’s superior to biodiesel in three important ways:

Moreover, the refining process is much more like petroleum diesel (i.e. hydrogenation rather than biodiesel’s transesterification for those who like the technicalities). This means it is a purer hydrocarbon which doesn’t contain oxygen as biodiesel does.

How the West was won

So why is this taking off in California? The short answer is incentives. The long answer is three complementary sets of incentives. Renewable diesel is eligible for Federal Renewable Fuels Standards (RFS), Californian Low Carbon Fuel Standard (LCFS) and Blenders Tax Credit (BTC) subsidies. These subsidies alone currently cover the fuel production costs meaning that early movers in this space are seeing profit margins of up to 45 percent.1 Numbers the oil and gas market could only dream of in today’s market.

The most important of these appears to be the LCFS. It was implemented to decrease the carbon intensity of California’s fuel mix by 20 percent2 by 2030 from a 2010 baseline. Carbon intensity is calculated based on emissions from the entire fuel lifecycle (including production, distribution, and fuel consumption) and LCFS credits are generated for every MT of CO2e/MJ of fuel emitted below a baseline level. In-state, out-of-state and foreign producers can all participate in the LCFS program. 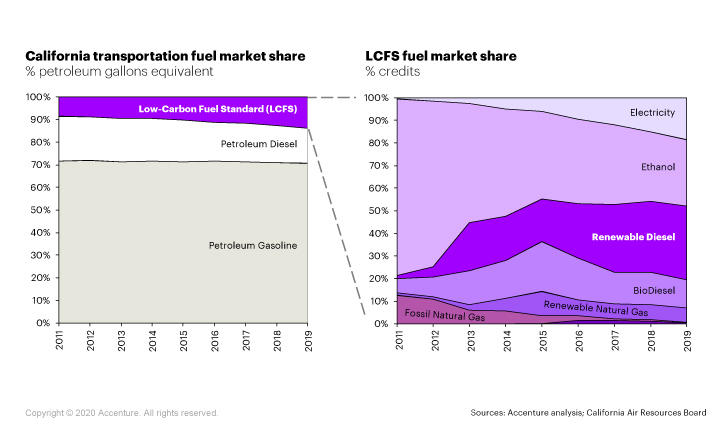 The good, the bad and the ugly

Renewable diesel is emerging as a clear winner from the LCFS system, along with electricity and ethanol, due to its subsidy eligibility and ability to reuse of existing infrastructure. Besides California, state renewable fuel regulations are currently in place in Oregon and British Columbia, with proposed regulations covering Washington state and the rest of Canada. With California’s LCFS reduction targets to increase by 1.25 percent annually3 through 2030 and potential new markets on the horizon, renewable diesel looks to be a sure bet for profitable short to mid-term emissions reduction.

However, the outlook isn’t all rosy. Renewable diesel has both some inherent challenges and an uncertain outlook. Tailpipe emissions are only marginally better than petroleum diesel, so it is difficult to see a pathway to zero tailpipe emissions from the fuel. In addition, there is an ultimately limited source of feedstock and high level of capital expenditure for new build plants and modifications.

Looking further forward, threats to the profitability of renewable diesel may grow as increased supply begins to catch up with and overtake demand (pipeline supply is already greater than total California diesel demand), hefty subsidies are removed (BTC will not be extended past 2020), and heavy duty EVs become cost competitive with diesel powered transport on most metrics between 2025 and 2030. In California in particular, electrification seems to be taking hold with a recent announcement to ban all internal combustion vehicles by 2035.4

For a few dollars more

So where does this leave the outlook for Renewable Diesel as a viable investment option for oil and gas companies? How can short term profits be captured, and longer-term threats be mitigated?

My view is that all the emissions reduction pathways available will be required to stand any chance of achieving the goals of the Paris agreement (limiting temperature increase to 2 degrees Celsius by 20505). For oil and gas companies especially, I think there’s a significant role to play in renewable diesel but it’s going to require acting now rather than later. I see four key success factors for creating a profitable and sustainable business in this market.

In short, renewable diesel looks to be an attractive option with its many advantages over biodiesel, high profit margins and ability to play into the harder to abate middle distillates market. Market entry will however, need to be well-formulated to maximize profits and mitigate substitution risks – the key will be breaking out of the subsidized western frontier.

Disclaimer: The views and opinions expressed in this document are meant to stimulate thought and discussion. As each business has unique requirements and objectives, these ideas should not be viewed as professional advice with respect to the business.