The COVID-19 crisis and the next economic downturn have put new pressure on companies’ efforts to become “more digital”. So how can executives respond? New research from Accenture finds they should focus on a very well-known, yet often under-utilized driver of effective and efficient change: cross-function collaboration.

It should be an obvious priority for companies to engage in tighter cooperation’s. Isn’t digital all about “breaking down silos”, first and foremost? And yet, we’ve found that most companies don’t make it their number one priority, and when they do, they often struggle to execute on it. Seventy-five percent of the 1,500 senior executives we surveyed said their different business functions are competing rather than collaborating on digitization.

This means their Research and Development (R&D), engineering, production, marketing, operations, and sales are in direct competition with one another to maximize their digital efforts. Instead, they should be collaborating to drive better results for the company.

The result of this internal competition? Companies don’t get the most out of their digital investments and are ill-prepared to respond to opportunities—or threats. In times like these, such behavior becomes a liability.

“Our business functions are competing rather than collaborating”

The cost of silos in competition

The issue of siloed functions is one we see time and time again in businesses of all sizes. But in this case, it’s hampering digital transformations and hindering the ability to drive growth in the post-digital world.

This, in turn, impacts both the bottom-line and top-line growth. It also has a knock-on effect on brand perception. If customers can’t access your products and services now, are they likely to once the pandemic is over?

In the report, we note that “As companies have grown, they have developed silos—centralized functions and divisions that often focus on their internal needs inhibiting collaboration. Now that the crisis is speeding up digital transformation, this old ‘walled garden’ problem is rearing its head again. It isn’t just preventing companies from digitizing their businesses as a whole, but putting them at risk of decline, not recovery or even growth.”

of surveyed companies aren’t seeing digital investments boosting their revenue growth at all.

The need for cross-function collaboration and digital transformation has never been clearer. Without it, companies will continue to suffer:

But it’s not all bad news. A small group of forward-thinking companies have found digital success where others failed. We call these companies Champions, and by examining how they operate we uncovered a pathway to digital transformation that all businesses can take.

Companies that do so stand to drive revenue through cross-function collaboration on digital investments.

Get collaborative, get rewarded

The Champions surveyed for our study achieved above-industry-average revenue growth over the past three years. Representing 22 percent of the sample, we found that the Champions had invested 1.5 times more in digital transformation than their competitors. This equaled to 39 percent of their total revenue, which may seem like quite a large figure. But through their investments, the Champions achieved revenue gains over four times higher than their competitors—27 percent compared to 6.6 percent.

In fact, these Champions achieve a profitable higher growth revenue than their competitors. By examining their EBIT (earnings before interest and tax) numbers, we found that Champions enjoyed 27 percent EBIT growth during the 2017-2019 period. In comparison, the competition achieved 2.1 percent EBIT growth. That’s a considerable difference in EBIT growth and one that could mean life or death for some businesses. 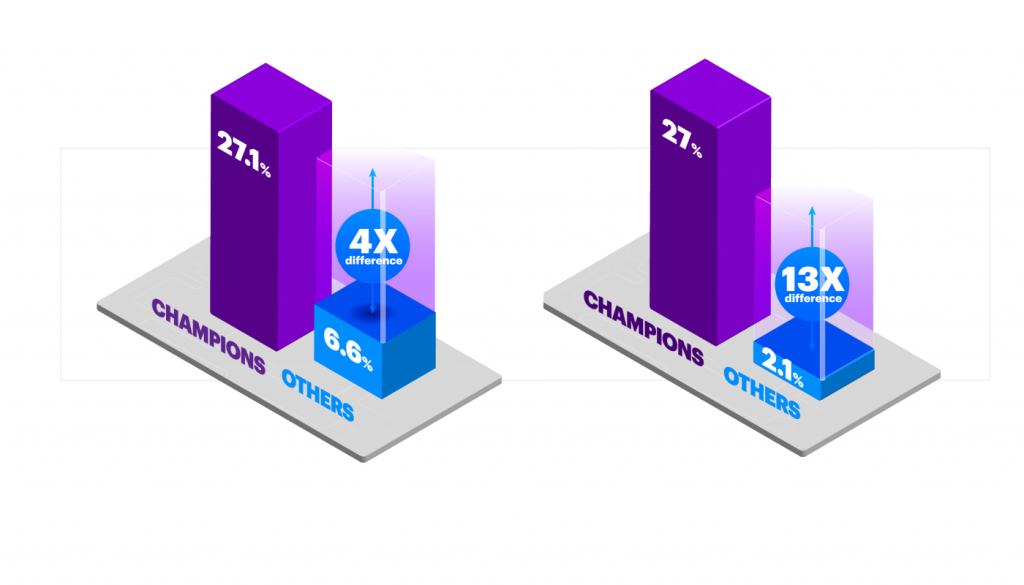 Collaboration champions achieve 4 times the revenue gains with digital projects, and they grow 13 times more profitably. Average digital transformation investments made across functions as a % of revenue (2017-2019). | Images: Accenture 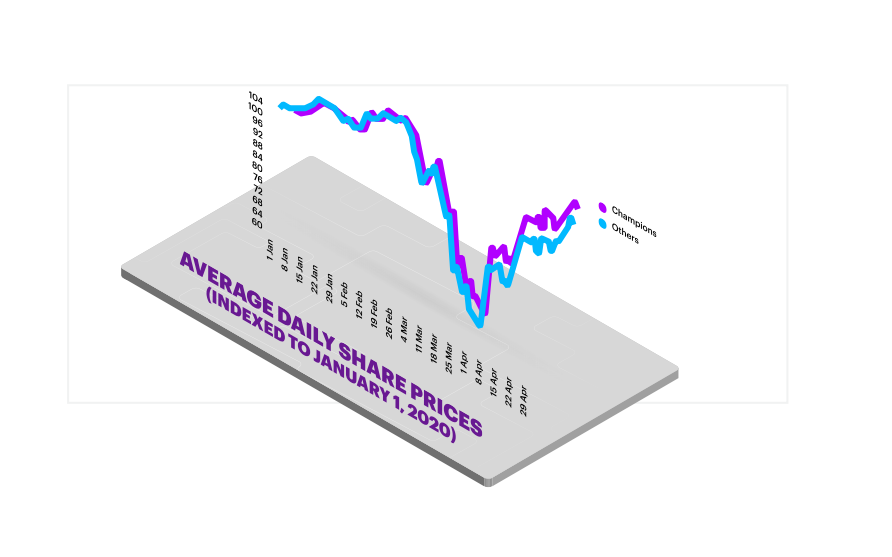 And additional analysis conducted after the start of the pandemic found that these Champions have weathered the current downturn better than their peers, outperforming them in average stock price. This suggests that the key behaviors of Champions also increased their competitiveness amid a worsening economic climate.

So why exactly makes these Champion companies so different from their competitors? The answer lies in five key behaviors that set the tone for how various functions come together to enable company-wide digital transformation. The behaviors are:

What sets you apart from other companies?

2. Find your key people and empower them
Champions assign ownership and responsibility around cross-function collaboration. They hold executives accountable for how well they cooperate and collaborate across the organization.

4. Make sure solutions speak the same language
Champions ensure that all of their digital solutions and platforms are interoperable. They invest in and rapidly scale platforms that empower continuous collaboration—this helps solve the problem of island isolation.

5. Create rules for the road
Champions build smart Information Technology and Operating Technology governance policies from the get-go. They establish clear rules for IT-OT, and how the two should work together.

As companies continue grappling with the adoption and implementation of digital technologies, or with hastening their digital transformations, they may easily lose sight of cross-function collaboration. But the Champions recognize it as fundamental to their business. Like efficiency and productivity, it is becoming an increasingly important barometer for success in difficult times.

For more, please refer to the report: Together Makes Better

Raghav leads the group that creates Accenture’s data models, key insights, and thought leadership for the Fourth Industrial Revolution and the shift to Industry X.0. A highly experienced researcher with a 25-year track record in creating new-to-market thought leadership, Raghav focuses on driving high-impact research programs for both Accenture and Accenture’s clients. His results have been published in the Harvard Business Review, Stanford Social Innovation Review, European Business Review, and many other business and research publications around the world and have earned him several awards and nominations. Get in touch with him via LinkedIn.

How to plan greenfield digital plants?

Six Accenture experts share the "planning canvas" they're using with clients. Find out the seven step-process that can help. 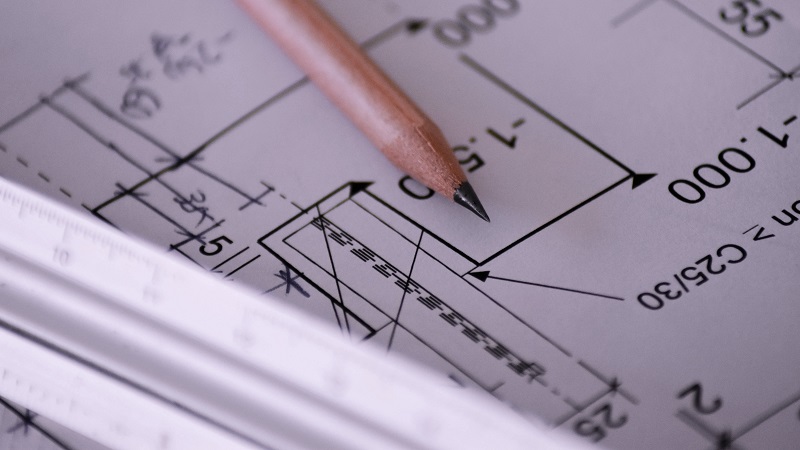 How to digitize and integrate your engineering data

Accenture's blog explains how AI and machine learning can automate the process of data digitization by using the right way. Read more. 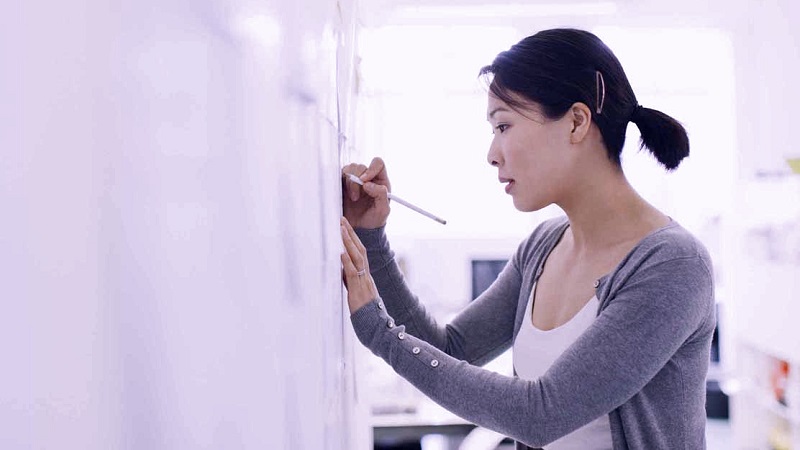 How to prepare R&D for the "never normal"

R&D needs to transform its operations to be flexible and data driven. Explore five steps to be more innovative with less resources.