Semiconductor M&A: Are rising valuations worth it?

Everywhere we look today, there’s exploding demand for technology, whether it’s 5G, the internet of things, cloud computing, remote working, mobility, electrification of transportation, autonomous vehicles…the list goes on. And COVID-19 has only accelerated many of these trends, further intensifying demand for computing power and hyper-connectivity.

These developments—which show no signs of slowing—have a huge ripple effect on the companies supplying the chips that power all of these technologies. Semiconductor companies face increasing pressure to figure out how they can grow in a world where technology-driven disruption is unfolding at a dizzying pace and simply pumping out more chips won’t guarantee competitive advantage, let alone survival, in the coming years.

That’s why M&A remains such an important lever for growth—arguably even more critical than in the past. And unlike yesterday’s deals, semiconductor M&A today is increasingly driven by a desire for diversification to position chip makers to capitalize more fully on robust market demand.

The Effects of Industry Consolidation

In the face of ballooning R&D costs, speed of technology turnover, and diverse customer needs, semiconductors are finding organic growth increasingly difficult. That’s driving leading companies to rely more heavily on M&A which, in turn, has unleashed a strong wave of consolidation across the industry (Figure 1). In the third quarter of 2020 alone, the industry saw a fresh round of mega deals announced, including the merger of Analog Devices and Maxim Integration in early July, AMD’s acquisition of Xilinx and the sale of Arm to Nvidia in the middle of September. 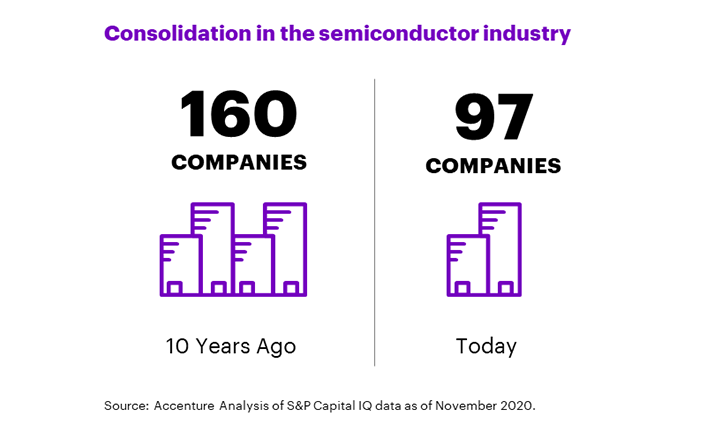 As the industry has consolidated, we’ve seen a “hollowing out” of the middle: The big players have only gotten bigger and, while the startup community is booming, the number of mid-size companies has dwindled significantly. As a result, companies looking to acquire now have two main options: larger acquisitions (and their high valuations), or smaller, tactical deals. This is consistent with the recent five-year trend of gradually increasing deal valuations (Figure 2). 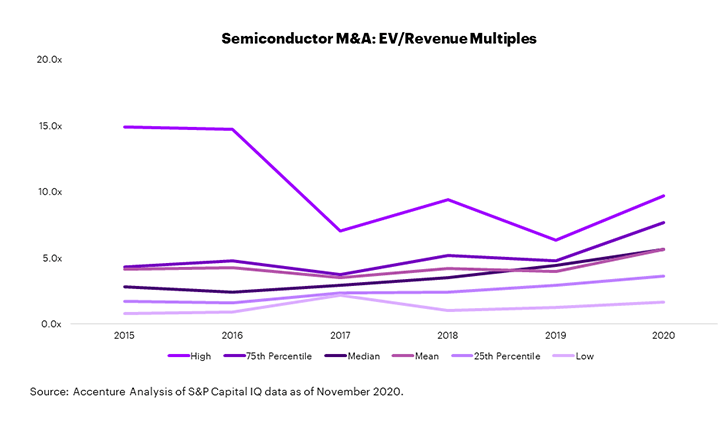 The rewards of diversification

The question for semiconductor companies is, are these higher valuations warranted? We believe they are.

Semiconductor companies are in a race to the bottom in silicon, as more and more value is found in other parts of the technology value chain. For example, although overall IoT spending, enabled by 5G and cloud computing, is growing at a 13% CAGR in 2018-2022, IoT hardware spending is expected to shrink at a rate of 2% over the same period, with the share of the market taken by software, services, and connectivity plays.3

Furthermore, software and platform (S&P) company valuations—and, as a result, their acquisition multiples (see Salesforce’s acquisition of Mulesoft in 2018)—have skyrocketed. With this in mind, more semiconductor companies are slowly realizing the need to diversify their revenue streams beyond just their silicon products to capture a portion of a broader market. We argue that as chip makers move up the technology stack to capture additional value in software and services, an uptick in valuations and deal premiums is warranted. 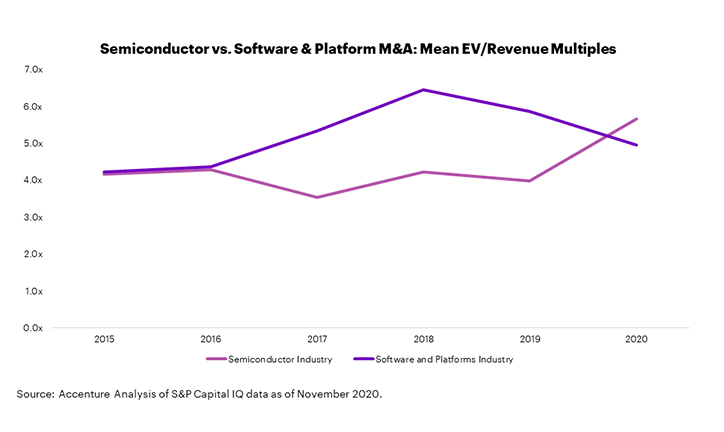 When Intel announced the acquisition in 2017, the $15.3 billion price implied an enterprise value of 60x Mobileye’s earnings and 21x its 2017 revenue. That was more than six times the semiconductor industry’s three-year average. While not enthusiastically received by investors at the time, the deal is serving the company well today. Mobileye is one of Intel’s fastest growing units and recently struck a deal to supply EyeQ camera-based gear and software for Ford’s global product line.

The Nvidia deal mentioned earlier also demonstrates the virtue in diversification. An acquisition price of $40 billion and a modest expansion of Arm’s revenue to $1.5 billion translates into an enterprise value of 26.7x Arm’s revenue. While that’s a hefty investment, Nvidia’s rationale is the deal—which has yet to be completed—would give the company access to leading chip designs, which could help Nvidia position itself to capitalize on AI by combining its core computing capabilities with ARM’s CPU.

Don't sit on the M&A sidelines

It’s certainly a turbulent time for semiconductor companies but it’s also an era of great opportunity, and the intense demand for technology and connectivity we see today is likely to continue. To ride that wave, chip makers need to make sure M&A is front and center among their growth strategies, and that they broaden their acquisition targets to help drive greater diversity in the products they offer and the customers and markets they serve. The potential to add significant new revenue streams and boost their future value that’s so important to investors can make the market’s higher valuations worth it.

Disclaimer: This document is intended for general informational purposes only and does not take into account the reader’s specific circumstances and may not reflect the most current developments. Accenture disclaims, to the fullest extent permitted by applicable law, any and all liability for the accuracy and completeness of the information in this presentation and for any acts or omissions made based on such information. Accenture does not provide legal, regulatory, audit, or tax advice. Readers are responsible for obtaining such advice from their own legal counsel or other licensed professionals. This document may contain descriptive references to trademarks that may be owned by others. The use of such trademarks herein is not an assertion of ownership of such trademarks by Accenture and is not intended to represent or imply the existence of an association between Accenture and the lawful owners of such trademarks.