This blog is part 1 of a 2-part series and will walk through an example attack timeline, address the critical events, and count down the days leading to ransomware deployment, as shown in Figure 1. Part 2 will highlight additional technical details of the intrusion clusters, associated attacker TTPs, and provide potential opportunities for detection that can be used to address these and similar “hands-on-keyboard” threat groups to support defenders in the field.

The information in this blog is based on data collected from CIFR incident response engagements. All intrusion data, analysis, and derived conclusions are based on Accenture’s distinct collection sources and available forensic artifacts.

The threat group has been seen using two different methods for initial access into the victim networks. The first is using previously acquired legitimate credentials that are not configured for multi-factor authentication (MFA) to access Internet-facing systems via exposed Remote Desktop Protocol (RDP) or using enterprise Virtual Private Network (VPN) services. The second utilized the foothold established by the SocGholish malware that was delivered to client systems via a fake browser update page. The fake update page, in this instance Google Chrome, is served from a compromised website with a message that indicates the client Chrome browser is out of date as shown by the example Figure 1. 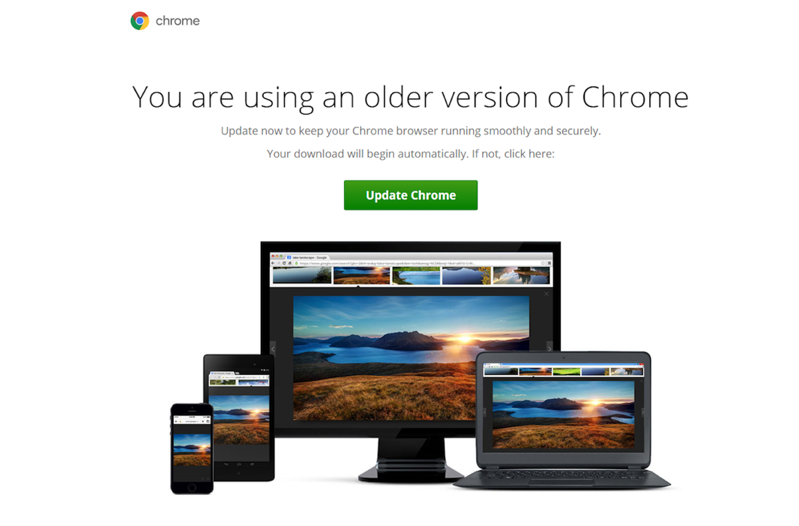 Depending on the configuration, a fake instance of Google Chrome is downloaded to the machine automatically or in response to the user clicking on the update button.

The SocGholish JavaScript code is encoded and has multiple stages of obfuscation to bypass security controls and evade detection. On execution, JavaScript will first profile the machine and exfiltrate detailed information system information such as:

If the machine meets criteria specified by threat groups, then the next stage of compromise commences as additional malware such as the post-exploit tool Cobalt Strike is downloaded to the machine. Figure 2 shows a generalized activity flow from variants of SocGholish from March and August of 2021:

SocGholish has been associated with the EvilCorp threat group as well as the threat group named UNC2602 by Mandiant.

Around 266 days before ransomware deployment:

The threat group dropped Cobalt Strike1 Beacon, an implant commonly used in ransomware campaigns, on 6 endpoints to further their foothold and maintain persistence within the victim’s environment. Shortly after execution, the Cobalt Strike Beacon connected out to the threat group’s Command and Control (C2) server, newschools[.]info.

The Cobalt Strike Beacon implant was found in the C:\ProgramData directory which served as a primary staging area for the threat actors. Accenture Security noted that the group operated out of this staging directory across multiple systems with several tools and executables tied to the intrusion set consistently stored and executed from this path.

The extracted configuration file associated with the Cobalt Strike Beacon implant was used by Accenture Security to confirm that the implant was configured to check-in to its C2 server at two defined domains (currentteach[.]com or newschools[.]info) for pending tasks and then proceed to sleep for 45000 seconds with a 37% jitter percentage. What this means is that the beacon will sleep for a random time between 28350s to 45000s before the next check-in, making it difficult to predict the beacon pattern using common network detection techniques. The configuration also highlights other settings used by the threat actor to make detection more difficult by using junk data and customizable protocol headers.

Around 265 days before ransomware deployment:

The threat group had a successful login using a valid account from a non-standard hostname paired with an IP address from the victim network VPN range. Inspection of the hostname collected from Windows Security Logs events showed the workstation names used by the threat actor were not consistent with internal naming convention and, in fact, the names were among defaults assigned to publicly available VM images intended for testing.

Around 180 days before ransomware deployment:

These documents provided key pivot points for the threat group to leverage.

Around 60 days before ransomware deployment:

Around 13 days before ransomware deployment:

Around 9 days before ransomware deployment:

Around 7 days before ransomware deployment:

Additionally, the environment was configured to federate access to the AWS environment via SAML using Microsoft Azure Active Directory as described by AWS Security Blog “How to automate SAML federation to multiple AWS accounts from Microsoft Azure Active Directory.” With this configuration, the threat group was able to login to the “Microsoft MyApps” portal with the valid stolen Azure AD user credential and access the AWS environments without any MFA prompt. This allowed console access to several AWS resources:

About 2 days before ransomware deployment:

The threat group executed PuTTY, a SSH client, and Advanced Port Scanner. Shortly after, there is evidence of Advanced Port Scanner being quarantined by AV and then it being removed from quarantine. This behavior is evidence of the threat group having sufficient privileged access such that they were able to disable or modify security tools to avoid their tools being detected or contained. Reviewing the filesystem showed that the threat group again made no attempt to conceal the nature of the tools.

Below is an example of a PowerShell command invoking a reverse SOCKS proxy.

The access and knowledge of the client environment gained by the threat actors over the past activities is employed to destroy the client’s ability to do business, hamper recovery, and collect sensitive data for increased leverage in potential ransom negotiations. Tempo and specific operations suggest at least two distinct sets-of-hands on keyboard operators.

About 6 hours before ransomware deployment:

The day of ransomware deployment, evidence shows the threat group utilizing Google Chrome to Google Search questions to help achieve their next steps such as how to disable security tools and retrieve credentials.

Below are the search history results:

During this time, the threat group is also seen accessing the following websites:

Shortly after, there is evidence of the threat group downloading a credential file, AWS CLI version 2, and PuTTY.

About 4 hours before ransomware deployment:

The threat group utilized 7zip to archive data that was then staged and exfiltrated to an attacker-controlled server hosted in Mega.nz cloud infrastructure, leveraging the MEGAsync utility. MEGA is an encrypted cloud storage tool often leveraged in ransomware incidents. After the data was exfiltrated, the threat group attempted to cover their tracks by moving all 7zip files to the recycle bin. Once again, evidence shows that the threat actor did not attempt to conceal 7zip and MEGAsync as shown below.

About 4 hours before ransomware deployment:

The threat group used “Microsoft MyApps” portal to get into AWS console and from there deleted all the S3 buckets containing the "backup” within in the name.

Then, a batch script, shown in Figure 8, that leveraged wevtutil.exe to clear event logs was used on affected hosts.

From a domain controller, the threat group used PSEXEC to make connections to 1,200 systems to push out a batch script to shutdown security services running on a 30 second sleep loop as shown in Figure 8.

After the security services were shutdown, the threat group pushed ransomware across the environment.

At this point, the threat actor leaves the network in shambles. The organization is left to recover their environment the best they can and contemplate paying the ransom.

Part 2 of this blog series will dive deeper into detection and hunting opportunities to be leveraged by network defenders.

If you have an incident or need additional information on ways to detect and respond to cyberthreats, contact a member of our CIFR team 24/7/365 by phone 888-RISK-411 or email CIFR.hotline@accenture.com

Accenture, the Accenture logo, and other trademarks, service marks, and designs are registered or unregistered trademarks of Accenture and its subsidiaries in the United States and in foreign countries. All trademarks are properties of their respective owners. All materials are intended for the original recipient only. The reproduction and distribution of this material is forbidden without express written permission from Accenture. The opinions, statements, and assessments in this report are solely those of the individual author(s) and do not constitute legal advice, nor do they necessarily reflect the views of Accenture, its subsidiaries, or affiliates. Given the inherent nature of threat intelligence, the content contained in this article is based on information gathered and understood at the time of its creation. It is subject to change. Accenture provides the information on an “as-is” basis without representation or warranty and accepts no liability for any action or failure to act taken in response to the information contained or referenced in this report.

The CIFR team helps Accenture’s global clients prepare for, respond to and recover from cyber intrusions and minimize business impact.