Will satellites and 5G spark a new world of mining?

What connects the mining industry, so grounded on earth, with satellites orbiting in space? Data. Tons of it.

In fact, mining is a perfectly logical match for the satellite industry. Mine sites are often remote and isolated, and basic land-based connectivity for communication and monitoring is often weak or non-existent. Mining companies have typically relied on aerial imagery and geophysics for exploration, and ground and drone-based surveys for stockpile and tailings dam monitoring. But all that may soon change.

Satellites and unmanned drones can provide off-grid broadband communications, high-resolution imagery, and precise geo-positioning services to aid things like autonomous mining. And while access to satellites was historically expensive—if even available—a flood of new, economical satellite options is on the horizon.

Until recently, only big-budget military organizations could play in the area of satellite imagery and communications. Industry was usually left with infrequent pay-per-capture images from a limited constellation of satellites, including Landsat satellites launched as long ago as the 1970s, or costly and slow satellite internet and communications (e.g., Iridium, the satellite phone company that went bankrupt in 1999).

Today, however, launch costs to low-Earth orbit (LEO)—160km to 1,000km above the Earth’s surface—have come down by a factor of 20.¹ The costs to build satellites have also declined precipitously, along the same lines as consumer electronics. In addition, more advanced image capture or communications devices can be squeezed into increasingly compact packages. And, nanosatellites are the size of a shoebox and the weight of a domestic cat, yet they have as many capabilities as the fridge-sized satellites of three decades ago. 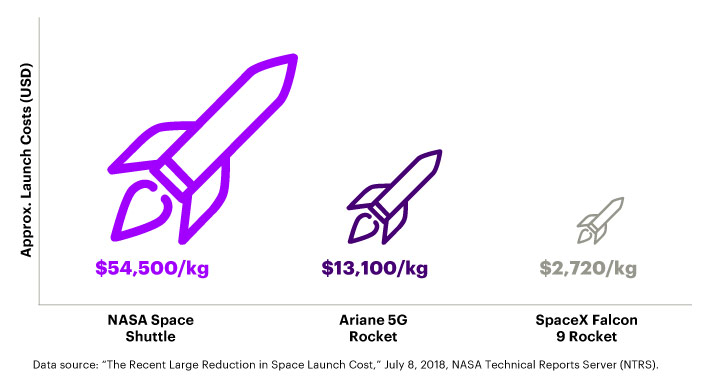 Some companies have already leveraged these lower costs to blaze new trails in space. As of the writing of this blog, Planet Labs has built over 500 satellites and successfully deployed 452—10 times that of any competitor—and currently has 200 in orbit collecting over 350 million square kilometers of imagery daily.² Yet the number of satellites in the Earth’s orbit, currently numbering around 3,000,³ is still expected to grow exponentially—so much that orbital traffic management is becoming a concern. By 2025 as many as 1,100 satellites could be launched each year,⁴ up from 386 launched in 2019.⁵ By 2029, the mid-range projection of satellites in orbit is 30,000, while the optimistic number climbs to 107,671.⁶

As a result of these trends, multiple applicable satellites will eventually be overhead at any given moment, and an explosion of reliable 5G bandwidth will be available to mining companies to monitor and operate their mines in a way never before possible. 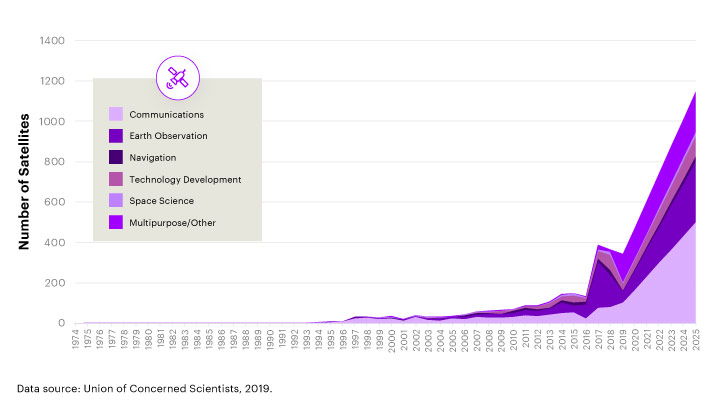 Furthermore, it is not just satellites that could be hovering above. High-altitude Unmanned Aerial Systems (UAS) with ultra-long endurance are being developed that could rapidly collect data at different altitudes—with the ultimate vision to include the stratosphere.

Satellites could transform the way miners and other remote industries do business, from exploration to extraction to the final sale of products. Miners will have real-time control of all aspects of their value chain to increase efficiencies and automation, streamline reporting, improve sustainability and provide early-warning systems for safety and environmental incidents.

Figure 3: Benefits across the mining value chain of satellites and 5G 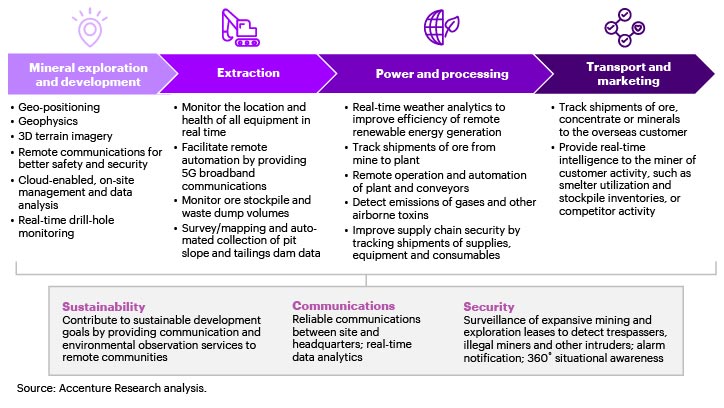 Even though the long-desired dream of robotic mining may ultimately be less data-intensive once fully achieved, the transition to such a realm will require enormous data and semi-autonomous capabilities for machine learning purposes. As such, the greatest opportunity for miners may be the provision of 5G broadband internet to remote mining areas where internet access is typically unavailable or unreliable, thus allowing them to take advantage of real-time data analytics, remote operations and automation to operate more efficiently and profitably than ever before.

Both Amazon and SpaceX have announced satellite 5G broadband initiatives. Amazon’s internet initiative, named Project Kuiper, involves a constellation of up to 3,236 satellites in LEO.⁷ SpaceX’s ambitious Starlink program aims to gain leverage from its low launch costs and fly 12,000 small satellites by 2027, with more than 1,000 satellites already launched.⁸ SpaceX’s Elon Musk suggested that Starlink might capture 3 to 4 percent of the global US$1 trillion internet access market by serving remote customers, representing revenue of over US$30 billion per year by 2025, ten times the US$3 billion a year that he thinks the rocket launch business will achieve.⁹ Morgan Stanley expects Starlink to have 360 million subscribers by 2040, earning an average US$21 in monthly subscription revenue per customer, yielding annual revenue of more than US$90 billion.¹⁰

To take advantage of satellites and 5G, miners will need to improve their ability to manage real-time data in vastly greater quantities than they have traditionally.

With so much satellite infrastructure being put in place by multiple vendors, miners may have the luxury of choosing data plans and image orders at competitive prices. The “cost to play” may be surprisingly low, with subscription and cloud-based tools replacing expensive upfront capital expenditures for servers and land-based communication equipment. Simply put, digital transformation and automation initiatives will become far cheaper and simpler than before.

Miners may even decide to launch their own satellite constellations, now in the realm of possibility given lower launch costs. Alternatively, miners could choose “rental” missions where customers can literally rent space on a satellite for their own devices.

For miners to take advantage of these new opportunities, they will need to be able to manage real-time data in vastly greater quantities than they have traditionally. Public clouds will be able to store and tie in all this information between mine sites, plants, ports and customers. Artificial intelligence may ultimately be able to assist in mine monitoring and onsite security by detecting small relevant changes in images. Remote Operations Centers (ROCs) could be used to manage the satellite-operated autonomous equipment.

Miners, normally accustomed to monitoring the earth at ground level, may soon be doing so from 200km above ground. With 5G and satellites, the dream of mining companies to control and monitor mines remotely may be another step closer.