The future of work is bright because of apprenticeships

Join us in embracing an inclusive model to help fuel economic mobility, innovation and a more sustainable and equitable future for all.

We recognize the important role professional apprenticeships can play in closing the skills gap in North America and we are reaching untapped talent pools, providing greater access to digital economy jobs and helping reskill workers whose jobs have been, or will be, disrupted by technology.

In 2016, Accenture established its internal apprenticeship program, and a year later cofounded, along with AON and Zurich North America, the Chicago Apprentice Network, partnering with local employers like McDonald’s, JP Morgan Chase and Walgreens to jumpstart their professional apprenticeship programs. Today, the network has 70+ member organizations and has well exceeded its initial goal to create 1,000+ apprenticeships.

Building off the success of the Chicago Apprentice Network, Accenture is working with AON and other organizations to expand the model across the country and has launched localized initiatives in Detroit, Greater Washington, D.C., Houston, Massachusetts, Minnesota, New York City, Northern California and Philadelphia.

We published a national playbook to help other companies join the national movement for professional apprenticeship programs and create a more inclusive innovation economy. 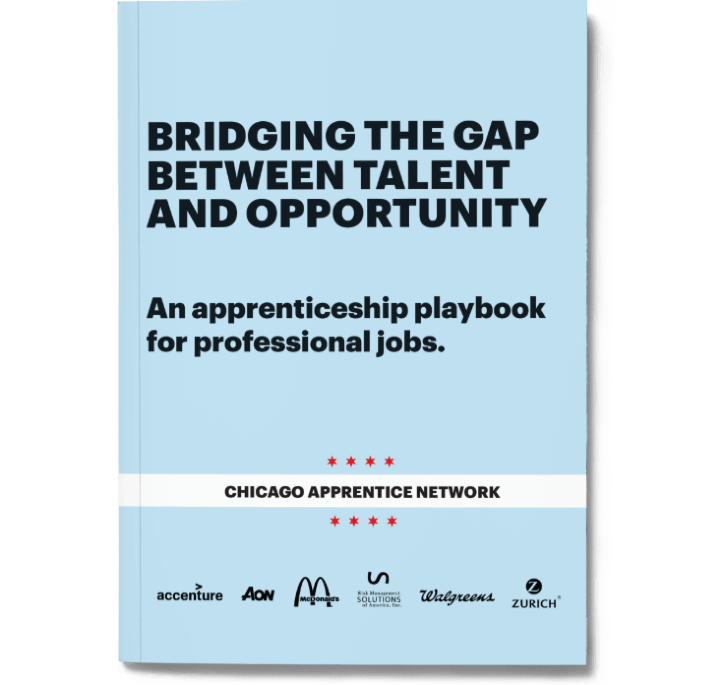 As part of our commitment to scaling professional apprenticeships, apprentices now make up 20% of Accenture's entry-level hiring. Want to become an Accenture apprentice? Express interest here.

Apply to be an Accenture apprentice

The North America Apprenticeship Program is a full-time, year-long “earn and learn” program that provides structured learning and on-the-job training to build skills and advance careers

Our apprentices bring a unique perspective to their careers at Accenture. Learn more about them as they start the next chapter in their professional careers.

A Syrian immigrant whose credits didn’t transfer, Ahmad put himself through college, became an apprentice, and is now a Security senior analyst.

Danica came to Accenture’s Apprenticeship through the Chicago community college system, and has since had continued success in our Corporate IT group.

Reggie, a veteran, became an apprentice through the nonprofit Project Quest. He is now a Salesforce developer with Accenture Federal Services.

Queen learned to code through NPower Canada, apprenticed with Accenture, and now serves clients in Calgary as a Technology and Data Senior Analyst.

A programmer with Year Up, Chance completed Accenture’s apprenticeship program and is now developing web applications with our User Interface team.

Originally a pipefitter, Carlos enrolled in a Grand Circus Coding Bootcamp and now works fulltime at Accenture as a business integration senior analyst.

Apprenticeships in the news

Providing opportunity to STARs through apprenticeships.

What’s the value of a tech apprenticeship.

No college degree? No problem. More companies are eliminating requirements to attract the workers they need.

Why many employers have ditched 4-year degree requirements.

A 4-Year Degree isn’t Quite the Job Requirement It Used to Be.