By Sanjeev Vohra, global lead, Accenture Applied Intelligence and Accenture’s alliance lead for the MIT and Accenture Convergence Initiative for Industry and Technology

The sustainability crisis extends to Low Earth Orbit (LEO), where human-made debris has become ubiquitous. As one piece of a broader solution, an MIT-led team with support from the MIT and Accenture Convergence Initiative for Industry and Technology, is studying the in-space performance of electronic textile technology that can sense debris impact to LEO, creating an opportunity for industry and technology convergence among the electronics, textile manufacturing, and space technology industries. This same material might also detect cosmic dust from interplanetary and interstellar origins. Like photons incident on a telescope, this microscopic dust might one day be traced towards events of cosmological interest.

For decades, spacecraft and spacesuits have leveraged textile substrates as their outermost protective skins.  For example, the exterior of the International Space Station is composed of Teflon-coated fiberglass (‘Beta-cloth’) which is robust to atomic oxygen erosion and designed for combined strength, durability, and flame retardation.

In a recent MIT-led research project with support from the MIT and Accenture Convergence Initiative for Industry and Technology, two electronic fabric swatches launched to the Space Station on July 14 on board Space-X 25, in collaboration with the ISS US National Laboratory and Aegis Aerospace. A robotic arm then mounted these swatches on board the MISSE exterior facility. During the week of July 25th, the system successfully powered on and began transmitting data to Earth. The goal of this six-month technology demonstration is to track the performance of these sensors in the harsh space environment.

Now, the team is augmenting these large-area space fabrics with cutting-edge multisensory functionality. Specifically, the team has developed vibration-sensitive piezoelectric fabric. Manufacturing is via fiber thermal draw towers and industrial-scale looms. The team anticipates that fabric sensors, which are typically sequestered to applications in consumer wearables, will now take on an essential role within the skins of our future persistent space-based assets. Back on Earth, additional creative fabric topologies are also under exploration to increase sensitivity to impact.

The team poses some ambitious and diverse questions enabled by this new skin: With regard to structural-health-monitoring, can this sensor-enhanced skin localize damage on future space habitats induced by the tens-of-thousands of pieces of manmade orbital space debris and micrometeoroids too small to be tracked by radar? From a scientific perspective, can the fabric on spacecraft walls double as an enormous detector of interstellar dust, tiny messengers from cataclysmic events of scientific intrigue traveling at tens-to-hundreds of kilometers-per-second and originating hundreds of lightyears away? And excitingly, what if astronauts could feel touch and texture right through their pressurized spacesuits? In each case, vibration sensitive fabric could serve as one foundational technology.

“The MIT and Accenture Convergence Initiative supported this work during the crucial one-year payload development phase,” notes PhD student and project lead Juliana Cherston. “Through the Initiative, I also received great regular career mentorship from Andreea Danielescu, a smart materials expert at Accenture Labs, who works on textiles in an HCI context.” 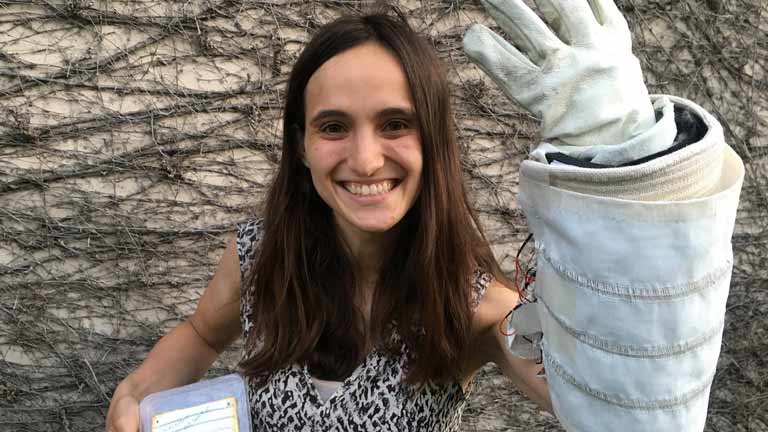 Most recently, Juliana’s project was awarded first prize in the aerospace category of the Create the Future Design Contest, which was launched in 2002 by the publishers of Tech Briefs magazine to help stimulate and reward engineering innovation. The annual event attracted more than 15,000 product design ideas from engineers, entrepreneurs, and students in more than 100 countries worldwide.

Space is one of the most interesting areas of technology innovation, and our collaboration with MIT is helping to create new opportunities for scientific exploration and discovery. In addition to aiding the work of astronauts in space, future applications of this new electronic fabric could potentially impact a range of industries and enhance the work of businesses and people here on Earth.

At MIT, the work is a collaboration between the Responsive Environments group at the MIT Media Lab and the Fibers@MIT group at the RLE. The LIPIT accelerator facility at the Institute for Soldier Nanotechnologies was used for ground testing. The experiment will run through January 2023.

Sanjeev helps to incubate bold ideas and integrate innovation and automation into how we deliver technology services to clients.