Here we are, the Screenagers ++. Our screen-centric devices have become appendages we cannot live without, as hyper-accelerated growth has amplified our dependency on real-time consumption, constant connectivity and an ever-expanding universe of expectations. Our digital maturity has reached a new and higher level.

From sprint to full stride, screenagers have multiplied faster than imagined. Today, not only are there more digital consumers, but more consumers own multiple smart devices. This is creating an array of new digital services and experiences, and more significantly, a "multiplier effect" that is generating more business opportunities at scale across every industry, age group and facet of human life.

We have identified five mega-trends that are distilled and analyzed from Accenture's 2016 Digital Consumer Survey to help companies disrupt the status quo and connect with customers like never before. 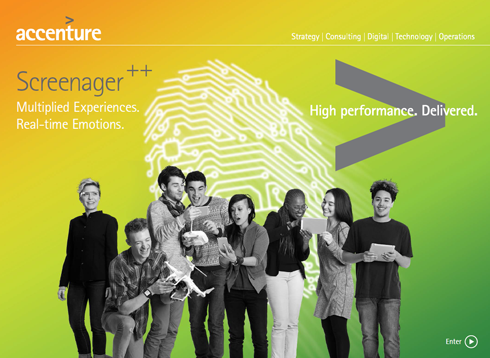 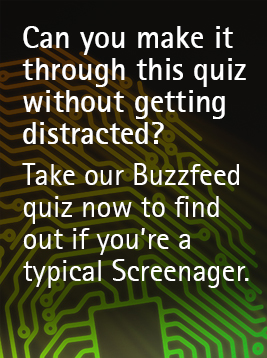 Hyper-accelerated growth has amplified Screenagers’ dependency on real-time consumption, constant connectivity and an ever-expanding universe of expectations. Their digital maturity has reached a new and higher level.

Accenture’s annual analysis of the five mega-trends from Accenture's 2016 Digital Consumer Survey helps companies disrupt the status quo and connect with customers like never before.

To provide companies with local insight, Accenture has traversed the globe to explore the behaviours and expectations of screenagers in 28 countries. Join our journey to discover more.


SELECT A COUNTRY TO LEARN MORE

Everywhere you look, eyes are angled down and aglow in the light of a smartphone, smartwatch, tablet or other digital screen. Screenagers not only own more devices, they own multiple types of devices. 80 percent of screenagers now own a smartphone—a 26 percent increase since 2012—and 40 percent own a tablet and smartphone as well as a desktop device.

With 87 percent of consumers now using mobile apps for communication services, we observe new types of usage—50 percent are already using or planning to use mobile payment services, and 46 percent take eLearning or online training courses via digital devices. This is the Multiplier Effect in action: greater scale and bigger dollars.

You turn on your house lights and adjust the temperature from miles away. As you head home, your refrigerator reminds you to stop and buy milk. Then your car plots the fastest route to avoid rush hour traffic and construction zones. When you arrive safely home you watch as a drone delivers a package to your front door. The future has never been closer and is full of promises.

As companies rush to release more and more intelligent devices and IoT applications, consumers have yet to be sold on their value propositions. These devices may be “smart”, but most are not easy to use and don’t offer clear services.

Although the next big thing is not here yet, the smart players are working hard to get it—whatever it will be—in front of screenagers before their competition does.

64%
faced problems when using intelligent devices. (Down from 83% from last year.)

Only 7%
think about bundling intelligent devices with a service.

The life of a screenager is characterized by intensity and immediacy. Their digital experiences need to be agile and real-time—smooth and safe. Nothing less will do.

Privacy and security are becoming critical priorities. 47 percent are concerned about privacy and security issues, while the lack of service quality is also causing frustration for screenagers. 71 percent are ready to pay extra for a better mobile network connection and 83 percent think advertising interruptions when watching digital content are far too frequent.

In order to achieve high performance, companies need to ensure safety, privacy and continuity of service so their customers don’t get lost in transmission.

83%
think advertising interruptions while
watching digital content are too
frequent

04 The Way You Make Me Feel

Screenagers Demand More or Nothing

As screenagers become more mature, sophisticated and selective, their wallets won’t open without good reason. 71 percent said that a large range of products and services that work well together will encourage them to purchase more. For now, however, they are only planning to increase their budget by 13 percent because they already have their devices, and are ultimately looking for innovative experiences, services, features and content.

Companies need to keep screenagers at the center of their market approach more than ever before. Knowing who their customers are, what they like and what they’re ready and willing to pay for is critical, and the difference between success and obsolescence.

The Way You Make Me Feel

plan to increase spending on
smartphones, tablets and
laptops.

41%
intend to purchase a
smartphone in the next year to
get the newest and most
innovative features.

Loyalty is a delicate balance to create and even harder to maintain. While no one owns the screenager, emotional trust is created by the right services, simplicity, identity, quality, privacy and products. This is fundamental to create engagement—76 percent of consumers think quality brands will encourage them to purchase more products and services.

Screenagers may say they love you, but they live and breathe real-time emotions. Unless you maintain constant brand engagement across all channels, you will quickly lose your audience—with 60 percent ready to switch to a new provider for better service.

76%
think quality brands will encourage
them to purchase more products and
services.

Explore our other latest thinking around the digital consumer.

Digital Trust in the Internet of Things era

The sample in each country is representative of the online population, with respondents ranging in age from 14 to 55 and over. The survey and related data modeling quantifies consumer perceptions of digital devices, content and services, purchasing patterns, preference and trust in service providers, and the future of their connected lifestyle.