We keep trending: consolidations and expansions

A massive wave of consolidation has swept across the semiconductor industry in the past decade, driven by growing demand for technology and leading to escalating valuations—not to mention about half as many large public semiconductor companies (97) at the end of 2020. Hypothetically, if this trend continues at the same rate, that number should continue to drop—to 75 companies by 2025 and fewer than 60 by 2030! In this post, we’ll discuss how likely it is that this consolidation will continue and why semiconductor M&A activity is poised to push on regardless.

Will we really see fewer than 60 semiconductor companies in 2030? Possibly not, but the developments show no signs of stopping in the near term. Despite an initial slowdown in deal making in 2020 due to the onset of the pandemic, several mega deals were announced in the second half of the year. While some of these massive acquisitions have yet to gain regulatory approval, it’s undeniable that every large player is eyeing the market and staking their bets for the future.

What’s more, consolidation appears to be producing significant, tangible results. Even with the number of large semiconductor companies decreasing to 97 from 160, the combined market capitalization of these companies is now $2.3 trillion—a far cry from $437 billion 10 years ago. In other words, the overall market expanded by 5.2x, resulting in an average increase in valuation of 8.5x for each of the surviving companies (Figure 1). Consolidation is clearly treating shareholders well. 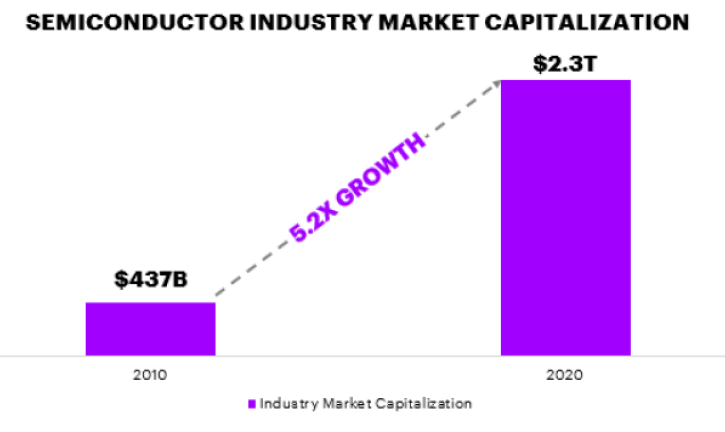 The decline of the "middle"

One factor that may ultimately slow consolidation is the decline of "the middle"--the midsize companies that are often acquisition targets.

Amount of surviving large companies that are valued above $30 billion, making them candidates for record breaking mega-mergers.

Companies valued at less than $10 billion, which won’t move the needle as much as previous deals given the market’s accelerated expansion.

The rest of the market, “the middle”¹, has shrunk at a faster rate relative to the other groups of semiconductor companies. In the past 10 years, the number of companies in “the middle” has decreased by over 50%, to just five. Simply put, leading players will find it more competitive (and expensive) to complete strategic deals of size to continue with consolidation.

In parallel to consolidation, another interesting and accelerating trend is occurring at the lower end of the market. Driven by a thriving innovation environment and healthy startup market, the number of public semiconductor companies valued at less than $1 billion has expanded by 82% in the past decade (Figure 2). These small to medium companies are growing just as fast and expanding just as quickly as the upper end of the market is consolidating. In addition to the expansion of public companies, the leading edge is also expanding relative to pivotal macro opportunities. For example, venture capital activity in the next generation of chips and their adjacent technologies flourished in 2020, largely supporting new technology trends and industry applications, such as artificial intelligence and new mobile applications. 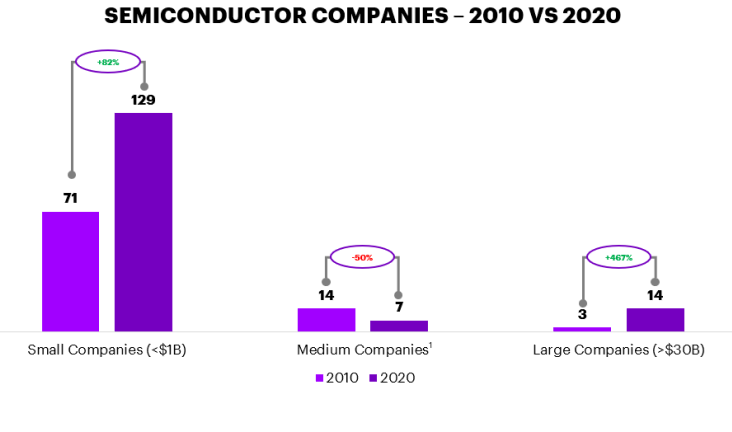 Even if the opportunities for consolidation are narrowing, the expansion of the lower end offers large semiconductor companies an alternative option to deploy inorganic strategies in new and exciting areas. The startup landscape is a proven source of competitive advantages and potential disruptors that mature traditional companies can use as springboards to create and build new ecosystems as well as to strengthen their own offerings. This was the case with Intel’s acquisition of AI chip company Habana Labs and, most recently, Qualcomm’s acquisition of chip design startup NUVIA. Make no mistake: The startup community is a vital part of the semiconductor industry’s M&A toolkit to sustain growth.

Disclaimer: This content is provided for general information purposes and is not intended to be used in place of consultation with our professional advisors. This document refers to marks owned by third parties. All such third-party marks are the property of their respective owners. No sponsorship, endorsement or approval of this content by the owners of such marks is intended, expressed or implied.

Copyright © 2021 Accenture. All rights reserved. Accenture and its logo are registered trademarks of Accenture.