It is no surprise to us that leading the charge in M&A activity is the U.S. The U.S. ranks first in both the number of deals transacted by buyers as well as the total deal value of M&A activity while commanding almost half the global semiconductor market share (Figure 1 and 2).¹ U.S. strategic buyers transacted the most both within the U.S. and globally, comprising 98 percent and 40 percent of deal value, respectively, in those regions. Asia (excluding mainland China) closely follows the U.S. in deal value, with the largest contributions coming from acquisitions made by Avago Technologies (Singapore), Softbank Group (Japan), and K.K. Pangea (Japan). 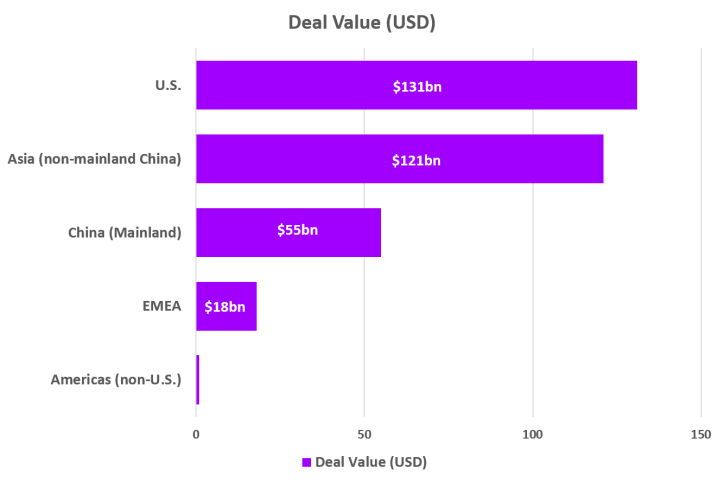 Caption: The U.S is the leader in the global distribution of deal value. 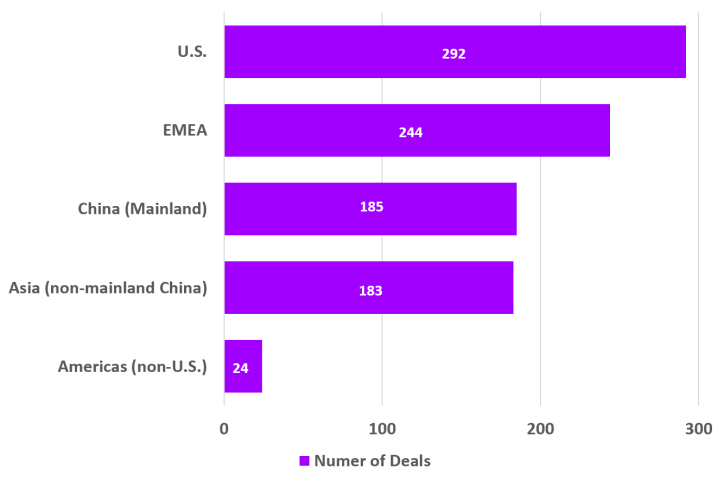 Caption: At a volume of 292 deals, the U.S. leads in global distribution volume.

China is a M&A powerhouse

China is clearly a powerhouse trailing only the U.S. in deal value from a country perspective. While this ranking isn’t likely to change in the near term, China’s Made in China 2025 plan— aims to build technological self-reliance and develop domestic semiconductor supply chain through state-owned investment funds. This will fuel more M&A activity within China’s borders in the coming years.

The impact of China’s industrial plan is evident in the changes in semiconductor M&A activity involving Chinese buyers and targets over time (Figure 3).² Approximately 30 percent of deals carried out by Chinese buyers involved state-owned investment funds, and the majority of these deals were executed within China. The primary state-owned fund is the China Integrated Circuit Industry Investment Fund, also known as the Big Fund, established in 2014 to support its mission to invest in its homegrown semiconductor industry.

While Phase I of the Big Fund raised 138.72 billion yuan ($19.63 billion), Phase II, which was recently incorporated in October 2019, was even more successful, raising 204.15 billion yuan ($28.9 billion). As a result, the number of M&A transactions within the semiconductor industry in China is on track to grow or remain on par with 2018-2019 levels, while transactions with other countries, particularly the U.S., will continue to dwindle. 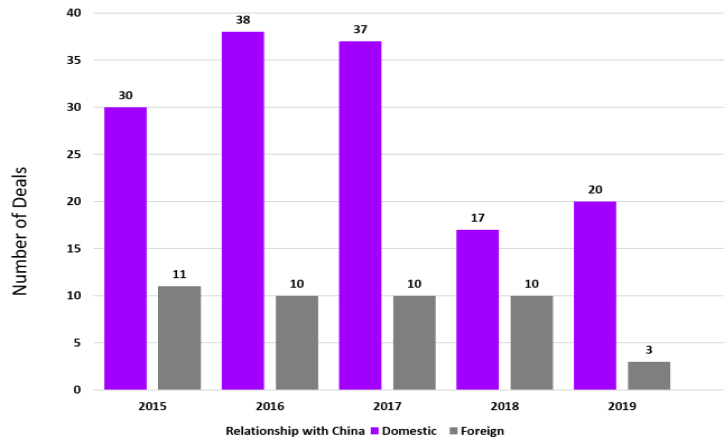 Caption: Domestically the number of deals has outweighed foreign deals and have taken a decline in 2018 and 2019.

Why is M&A activity declining? One reason, especially among strategic buyers and even more so with global deals, are rising security concerns surrounding cross-border deals amidst the increasingly tense geopolitical climate beginning in 2016. Given a change in direction from the U.S. government, the Committee on Foreign Investment in the United States (CFIUS) has strengthened its review process of cross-border transactions for potential national security concerns, this has had an impact on deals (Figure 4).³ 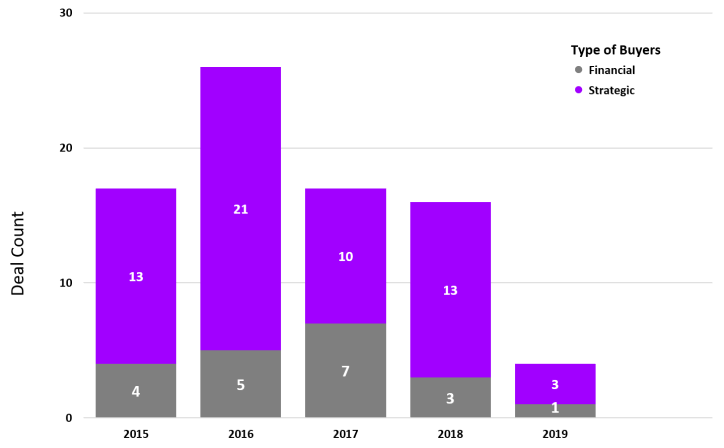 Caption: Year over year the strategic buyers outweigh the number of financial buyers in merger or acquisition deals that have failed.

Recent examples of intra-industry deals that failed to close due to regulatory hurdles related to anti-trust and national security concerns include:

Of the intra-industry deals that have recently closed or are on the cusp of closing, significant regulatory hurdles have caused delays of over a year. Most notably is Infineon Technologies’ (GER) acquisition of chipmaker Cypress Semiconductors (U.S.) for $9.8 billion, which received approval from CFIUS and China almost a year after being announced. Recently, Nvidia’s (US) acquisition of chipmaker Mellanox (ISR) for $6.8 billion held up for Chinese approval for more than a year before closing in April 2020.

Heightened tensions are dampening the number of deals pursued. And in doing so, they’re restricting the mobility of technology, solutions, and talent within the industry. Countries outside of the U.S. and China are finding they need to pick sides, and companies are less and less willing to play ball. Protectionism has created a divide, and time-to-market for products is the principal victim.

The deal pipeline hints at a shift in M&A strategies

Given the current economic conditions, the heightened regulatory challenges of closing deals within this industry, and the simultaneous shift toward acquiring emerging technologies there is one thing that is certain…M&A will continue to be a major driving force to a semiconductors company’s growth strategy.