In our groundbreaking book, Waste to Wealth (2015), Accenture identified $4.5 trillion in additional economic value that can be generated by the circular economy by 2030. A circular economy shifts away from many organizations’ centuries old approach of “take, make, and dispose,” creating closed loop processes that minimize waste and aim to continuously regenerate value with the inputs at hand.

This approach is more than just a recycling strategy, which emphasizes repurposing waste after it’s been created. Building a true circular economy means completely reimagining the value chain, or the full set of activities involved in delivering value to customers through a product or service, from concept to distribution.

Circular economy principles can be used to transform federal government operations by providing a holistic framework to look across systems and better understand our resources, relationships, and interdependencies. By doing so, we can break down silos and capture new forms of value, with an emphasis on continuously reusing and repurposing social, economic, technological, and natural resources. This can enable more sustainable, efficient, and resilient government operations.

Imagine this perspective as we tackle climate change. In our warming world, practices like limiting carbon emissions have historically aimed to decrease or stop negative effects. By harnessing circular economy principles, captured carbon and other GHGs could instead be viewed as a commodity. Carbon is sequestered then turned into useful goods such as plastics, fibers, and other resources that can be used in our daily lives. We no longer aim for just net-zero – instead, we create a net-positive.

Now, the approach is increasingly seen as necessary to meeting essential climate goals: “…We need to redesign our economy — eliminate waste and pollution, circulate products and materials, and regenerate nature — to reduce emissions and meet the targets set out in the Paris Agreement,” writes the Ellen MacArthur Foundation. The European Commission’s Circular Economy Action Plan is one of the main building blocks of the European Green Deal, the EU’s flagship strategy for tackling climate change.

For the U.S. federal government, we’re pleased to see the concept of a circular economy gaining traction:

Yet, more can be done to catalyze circular economies across government and the time to do so is now. By adopting a circular economy mindset, federal agencies can create and achieve more value from their systems while simultaneously working toward a more sustainable and resilient future for generations to come.

A tool to bring circular economy to life

To help federal agencies identify new forms of circular value and eliminate waste, we created the Regenerative Canvas, a simple, yet effective tool that seeks to reframe value to minimize leakage and illuminate new, more effective ways of operating.

Combining Systems Thinking and elements of other known tools, such as the Value Proposition Canvas and the Business Model Canvas, we ask clients to begin by conceptualizing anything, though we recommend starting small – a single product, solution, or even a piece of trash. 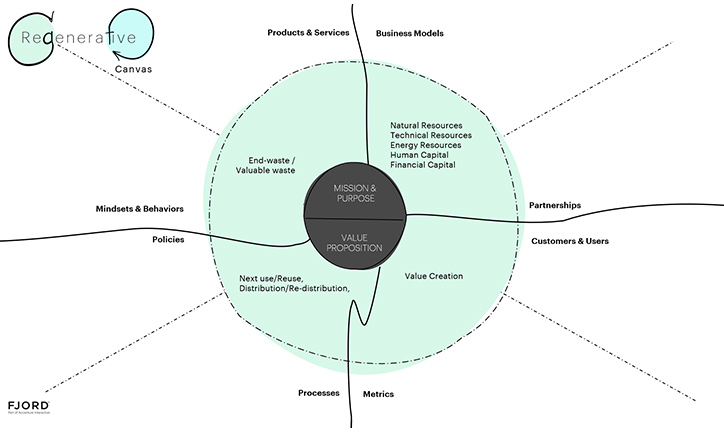 To build sustainable and regenerative ecosystems, we must continuously identify and maximize where we receive value.

The systems driving government operations are increasingly complex and interdependent. As such, it is imperative that agencies reframe their perspective on value using concepts such as circular economy, whether by leveraging existing structures like shared services, reimagining waste, creating new ways of working, or developing new organizational models. Doing so will ensure we build processes that both operate effectively and do not deplete our fragile environment.

At its core, circular economy is about the mindset and behavioral changes that enable future value creation – in essence, government sustained and regenerated.