Are the benefits from new technology visible in your P&L?

After years of investing in new technologies such as automation, robotics and other digital capabilities, many companies—especially in asset-intensive industries like chemicals, steel or cement—now find themselves facing a paradox: while they’ve made significant visible investments in new technologies in recent years, they’ve seen no visible improvements in productivity as a result.

In terms of the level of investment, the figures tell their own story. Between 2008 and 2018, companies in asset-intensive industries spent between 6 and 7 percent of their sales revenues on new capital investments—and for many of these years, they were investing between 0.2 and 1.1 percent of sales in new digital technologies and automation. The result? Our Technology Vision 2018 for the chemical industry1 shows that 53 percent of chemical companies with revenues between US$1bn and US$10bn spent more than US$100m each on new digital technologies between 2016 and 2018.

Where are the productivity gains?

A key goal of this investment was productivity improvements. It’s well-known that digital technologies such as business process automation, robotics and mechanical automation help to reduce manual effort, create more transparency around performance and enable better decisions. All of these impacts should contribute to higher productivity—certainly in excess of the productivity gains of 1 percent that one would normally expect as a result of continuous improvement efforts.

Are new technology benefits visible in your P&L?

However, as Figure 1 illustrates, labor productivity on an aggregate level for a sample grouping of chemical and natural resources companies (including mining, metals, forest products, and building materials) has shown little to no improvement over the past 10 years. A closer look at the findings reveals some significant insights: 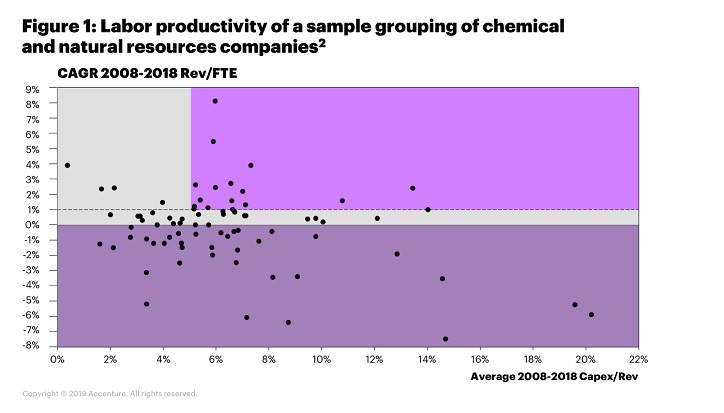 Zeroing in on the reasons for the generally poor productivity performance, there is a long list of potential root causes, often company-specific. However, our research and project experience point to a set of common themes. These include:

…call for a greater management focus

With these barriers identified, and the economic cycle now passing its peak, the imperative for companies is clear and urgent: now is the time to capture the productivity gains, headcount reductions and asset productivity improvements from investments in new technologies.

Currently, many companies are seeking productivity improvements by resorting to traditional measures such as curbing discrete spend and travel costs and stretching accounts payables beyond the previous standard terms. However, the impacts of such measures are often short-term and unsustainable—and using them resembles a “light the candle” approach aimed at weathering the downturn while hoping for the cycle to pick up soon.

Steps such as implementing productivity gains at the partial headcount level, extracting value from daily routine and non-routine shop floor operations, reducing demand levels, and taking a consistent and comprehensive view of automation functionality and its impacts on actual work are not easy tasks. Often, the small value potential of each individual initiative means it tends to fall under the radar when it comes to getting management attention.

But, in this case, the total of all these small value opportunities adds up to a big figure. Accenture research shows that full and effective deployment of new digital technologies can yield an additional 12 percent EBIT margin. And we estimate that just by realizing the full benefits of investments already made and technology already deployed, companies can capture an additional 1 to 2 percent EBIT margin.

How can companies achieve this uplift? We recommend five steps:

The message is clear. In an ideal world, technology investments drive strong rises in productivity. Today, in asset-intensive industries, that link has been broken. It’s time to rebuild it—and make the benefits visible in the P&L.