The moral case to reduce carbon emissions has more than been made, with November’s COP26 conference laying bare the imperative to achieve a net-zero future—and the pivotal role businesses will play in the transition. Against this backdrop, leaders across the corporate world are stepping up, with 65% of CEOs already advancing net-zero business models and solutions and endorsing bold climate action in the regions where they operate.

The shift to renewable generation is energy transition’s heavy lift. So much so that the United Nations has created a dedicated Sustainable Development Goal: to ensure access to affordable, reliable and sustainable energy for all.

While the moral basis for change is well understood and widely accepted, what of the economics?

As margins shrink and tax incentives on current assets expire, independent power producers (IPPs) are confronting financial realities that may make it difficult, in the long term, to operate profitably in unregulated markets. On the other hand, regulated utilities are well positioned financially to take up the slack.

The renewable generation game is changing, and many of my clients are asking: What do I need do to play in this ecosystem and win?

Here’s my answer, using baseball as a metaphor: decide if you’re the pitcher or the catcher. Does the new asset ownership paradigm require you to sell or present an opportunity to buy? There are winning steps you can take, regardless of the position you choose to play.

Reflecting on the status quo

The U.S. wind industry has grown substantially since the introduction of production tax credits (PTCs), which paved the way for investment. However, reductions in PTCs have caused annual new additions to plateau in recent years. And this lack of certainty over the future of PTCs and competition from other renewables have combined to hinder growth.

So, who has been in the wind industry game so far?

Mainly independent power producers (IPPs) still hold 80% of wind generation assets in the United States. Why? Because generally unfavorable merchant markets have pushed IPPs into low variable cost generation, including wind. IPPs have been able to develop wind sites faster than investor- owned utilities (IOUs) and monetize tax incentives (such as PTCs) more efficiently. Plus, with high levels of competition among IPPs, they have become experts at decreasing operations and maintenance costs.

But it’s not all plain sailing, with IPPs increasingly under the economic pump when it comes to wind.

Margins are being squeezed hard by the convergence between the levelized cost of energy (LCOE) and power purchase agreement (PPA) pricing, with IPP players in the space already struggling to hit 5% margins. And without PTCs, IPPs will struggle to compete on pricing (see Figure 1). 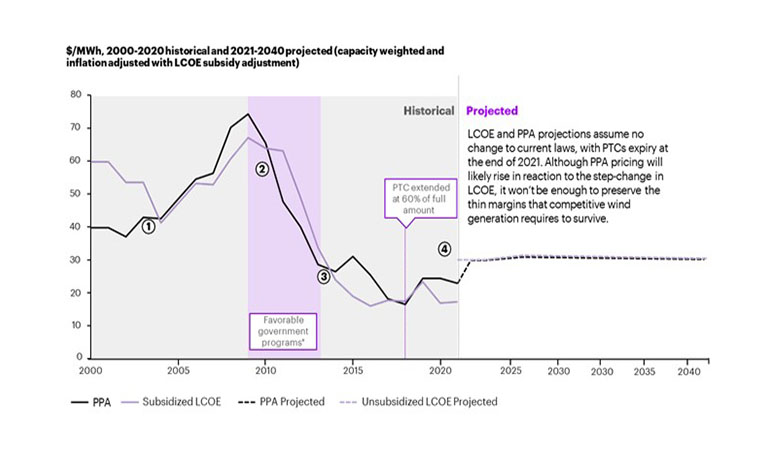 Meanwhile, IOUs have slowly start to enter the wind market through build-own-transfer deals. IOUs are becoming savvier about the market and now, we’re beginning to see a shift in ownership.

Costs are coming down, primarily driven by larger capacity deployment and incentives for the wind industry, and IOUs are responding. They now hold around 16% of the market share, and it’s rising—consider that IOUs account for 27% of planned capacity additions.

All of this stacks the cards in favor of regulated utilities. So where to from here?

The broad view ahead

Against that backdrop, my clients want to know: Where should I go with my business when it comes to wind and solar?

My answer: with margins increasingly unviable for IPPs, looking ahead, regulated utilities will eventually control the balance of U.S. wind generation, catalyzed by the expiry of PTCs in 2021. IPPs in regulated markets will divest their wind assets as PPAs expire, shifting ownership to IOUs.

A decade from now, the ownership mix for renewable generation will look a lot like the coal/natural gas ownership mix does today.

How it shakes out for the players

Remember the question of pitching and catching? Which position will you play?

For IOUs to capture the value on the table, they’ll need to build the capabilities internally to develop and run wind and solar assets and invest accordingly. But they need to act fast, to ensure they are ready to catch the ball that IPPs are about to pitch, as they begin to divest wind assets.

Meanwhile, IPPs will need to adapt and rethink their business models by focusing on capital efficiency and margin management to remain profitable as long as possible and being savvy about investing capital in the market going forward.

More generally, IPPs must shift focus to de-regulated markets and/or speculative asset classes in regulated markets, such as storage. This may also mean thinking about planning the transition out of wind sooner rather than later before a glut of wind assets on the market depresses pricing.

But whichever side you fall on, it pays to get your house in order and think ahead to the next move. Often times, IPPs are betting on an extension of federal tax credits while chasing declining margins. And IOUs continue to default to PPAs, based on the (frequently incorrect) assumption that they can’t compete on an LCOE basis with IPPs.

Both sides are yet to fully make this transition, in part, because neither fully realizes that a transition must occur. But economic realities require it.

As the scope for renewables explodes, it’s time to be strategic and plan ahead. There will be winners and losers, but those who decide where and how to play will come out on top. Contact me to talk more about what to do next.