A closer look at the American Jobs Plan updates

The pathway to an infrastructure bill

One key priority of the Biden administration is to rebuild and reimagine the next horizon of the U.S. economy by investing in new infrastructure, creating well-paying jobs and accelerating the clean energy transition. The American Jobs Plan (AJP) is set to provide a historic level of funding to utilities that could catalyze the next horizon of the industry. The plan could also prepare companies to be “future ready” by building clean infrastructure that will drive pathways to decarbonization for the U.S. economy.

Since the AJP was released by the White House, it has been subject to multiple rounds of negotiations and evolving total funding levels ahead of its’ late September 2021 target for final legislation. 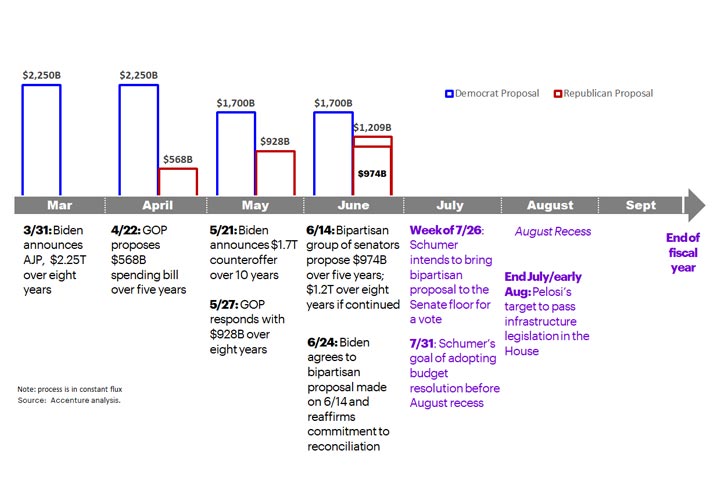 Caption: Road to bipartisan plan and what comes next

In late June 2021, a core bipartisan group of 22 senators (including 11 Republican senators) reached a deal with the White House to spend $973 billion over the next five years—and $1.2 trillion if continued over the next eight years—on a sharpened infrastructure package. This package would fund improvements to roads, bridges, transit, airports and enhanced infrastructure for broadband, water and electric vehicles (EVs). The plan includes nearly $400 billion in expected baseline transportation funding that Congress must regularly renew, along with $579 billion in new spending. Of the new spend, there is $312 billion for transportation projects and $266 billion for other infrastructure needs like water systems, broadband and improving power grids.

There are some important differences between the initial AJP proposal and the latest Bipartisan Infrastructure Framework. Specifically, the $579 billion in new spend has some priorities from the AJP, with historic investments planned for electric infrastructure:

Ahead of the September target for final legislation are still several potential impediments that could further delay or substantially reshape the bill. The most significant is what will become of the Democrat’s recently announced $3.5 trillion top-line spending level for a bill that focuses on more partisan priorities—climate and social services. Democrats don’t expect GOP support for these provisions, and it is an open question whether the Democrats will be able to gather enough support within their own party to pass the second package through budget reconciliation—a maneuver that enables legislation to advance via a simple majority.

Refined guidance for utilities, and some risks to watch

While the utility and adjacent industry-related investments are narrower than the administration’s initial ambitions, there are still substantial opportunities for utilities to advance their growth agenda through stimulus-backed infrastructure—similar to the 2009 American Recovery and Reinvestment Act (ARRA).

The 2009 ARRA continues to provide a good blueprint for how the infrastructure plan might unfold and offers steps utilities could take now. One major lesson learned from this earlier legislation: utilities that were prepared and acted early generally were the biggest winners. These utilities ultimately received funding for their smart meter/smart grid programs and are the foundations of current grid modernization programs.

To maximize impact of the future 2021 infrastructure program (and any companion legislation), utilities should consider activating the following actions now:

Finally, there are potential broad market risks that are likely to be further amplified when more than $1 trillion of infrastructure projects is injected into the market. These include the following commodity risks, labor shortages and permitting delays:

The utilities industry is on the cusp of an historic level of infrastructure investment that has the potential to serve as the catalyst for its next horizon of growth and enable the utility to activate projects that otherwise would not be fully rate-based recoverable in their jurisdictions. Now, more than ever, there are also significant convergence opportunities with the public sector, automotive companies and communications companies given the types of infrastructure categories being considered (such as end-to-end electric vehicle enablement). Now is the time to act.

Please contact me to find out more and how.