The race to agility: Upstream plans its next big move

The illusion of normalcy

Oil is back! Over the past few weeks, oil prices have settled above $60. Like many others, we're tempted to look back at 2020 as just a bad dream from which we're finally, thankfully, awakening. This must mean the upstream industry can focus again on growth. Not so fast. COVID-19 wreaked havoc on upstream companies. But, in truth, the pandemic just accelerated what was set in motion back in 2014. It hastened the inevitable.

Even at $60 per barrel, the sector is not returning enough cash to its investors. It's been lagging for quite some time. The reality is that below US$70 per barrel, the sector is returning at least 20 percent less cash than the S&P500 would expect1. And as much as we would like to forget 2020, we can't ignore the new set of challenges that intensified last year. Unlike the lockdowns, those challenges are here to stay. One is the low-carbon imperative. Another is the falling demand for oil, which will likely remain depressed in the post-COVID era. In fact, we think the famous "peak demand" we've been waiting for has possibly already come and gone.

But what about the rebounding price of oil? Surely that bodes well for the sector, right? Not really. We can't take too much comfort from the current prices, since they are largely due to artificial cuts by OPEC+, which are reviewed monthly. The reality is that the market is still oversupplied, and the industry needs to adapt to a world where production will no longer grow by 1-3 percent per year on average. A first in over 100 years2. The conventional tactics of cyclical layoffs, aggressive third-party concessions and capital expenditure reductions will be neither sufficient nor sustainable. The shortfall in the amount of cash needed is just too large.

We believe upstream players need to not only drive efficiencies, but also transform their operating philosophies to build business resilience. The name of the game is margin optimization. This means resetting and variabilizing cost structures to address lower demand and more volatile oil prices.

The good news is that the philosophical reckoning—and cost re-setting—are underway. A lot is going on in the industry. Portfolios are being realigned. Production forecasts are being adjusted. Investments are being re-directed to other parts of the value chain. Such actions will yield results. But will they be enough? And will they be sustainable? We’re doubtful. A company can rarely cut its way to greatness—especially in an environment where pricing volatility is likely to continue vexing the industry for years to come. This is where the cost variabilization comes into play.

Variabilizing costs is challenging. Over the years, upstream companies have built deep functional muscles to drive continuous growth, control costs and improve operational safety. Their efforts have produced a fair amount of operational rigidity in terms of investment decisions, resource deployment and decision making. Additionally, the traditional operating philosophy was based on growth and “pushing production” to the market in a fairly predictable way. It was not designed to react and adapt to the signals of volatile demand. The new challenge—and opportunity—is to turn that old philosophy on its head. Companies need to move toward a “market pull” model where they can flex production, dynamically deploy resources across assets, and adjust investment plans more frequently based on economic conditions. This shift requires a higher level of combined commercial and operational agility that does not exist in the traditional upstream model today.

But here again, we’re seeing several important changes happening in the industry. For example, a number of large companies are transitioning their focus on exploration from large discoveries (that can take many years to materialize) to local opportunities to re-plenish existing assets. Also, several operators are transforming their organizations with digital technologies to simplify workflows, accelerate decision making and drive end-to-end accountability. New alliances have been formed with third parties to access specialized skills without adding to their internal costs.

These changes can usher in new value creation opportunities. In our work with unconventional players, we have seen they realize a US$2 to $3 per barrel margin uptick by adjusting their production in a matter of days, not weeks or months, based on market pricing3. The realization that not all barrels are created equal and that one can generate more cash by producing less is not trivial.

Another example of new and agile ways of working involves our work with an upstream company to help it manage a pool of technical resources across assets. By consolidating talent and more aggressively leveraging offshore and third-party resources, the company lowered its cost basis by an additional 20-30 percent4. This is a great example of resetting and variabilizing costs. It also took quite a bit of effort to break the traditional mold of having captive technical staff attached to each asset.

The fragility of agility

We’ve seen great examples of the value of commercial and operational agility. But it’s not easy to achieve. A number of barriers stand in the way (see below). To become truly agile, companies will need to address three sets of barriers that can impede the adoption of structural changes and new ways of working. 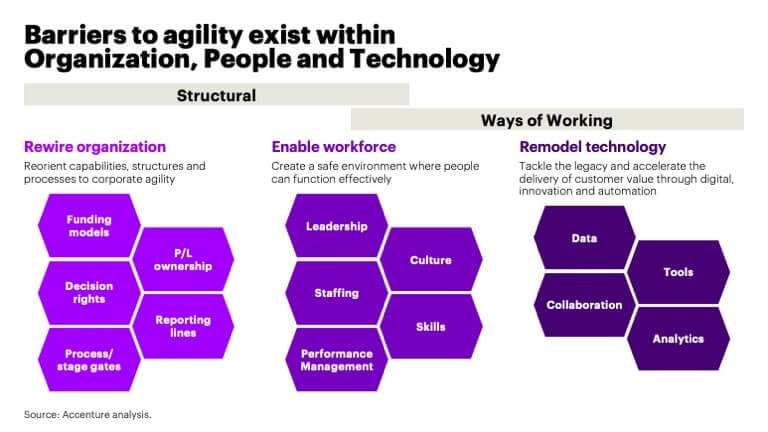 We believe corporate agility will be an important determinant of upstream companies’ success in the future. There’s been a lot of rhetoric about “agile” in energy companies in recent years. But its focus has been on IT; agility is still a relatively novel idea when applied at the enterprise level. Some companies, however, are starting to experiment. Their efforts are revealing the questions that other organizations—especially larger ones—will face: Where should we start? How will we scale? How can we mitigate business disruption? How will we know if this new way of working is better than the established ones? How do we bring people along on the journey to agile?

These are all legitimate questions. Unfortunately, there are limited examples of enterprise agility in the industry to study and emulate. But there are answers that can be found outside of the industry. Some large companies in other sectors have achieved material success via agile transformations of their business. In a future blog, we will highlight some of those stories and describe how they’ve managed to address the organizational, people and technology challenges that will inevitably face the upstream sector. Watch this space.

Disclaimer:  The views and opinions expressed in this document are meant to stimulate thought and discussion. As each business has unique requirements and objectives, these ideas should not be viewed as professional advice with respect to the business. This document may contain descriptive references to trademarks that may be owned by others. The use of such trademarks herein is not an assertion of ownership of such trademarks by Accenture and is not intended to represent or imply the existence of an association between Accenture and the lawful owners of such trademarks.

Partnering with leaders to drive complex, large-scale, strategic change in organizations with focus on digital transformation, M&As and cloud.