How can intelligent technologies fuel the future workforce?

Digital technologies are disrupting the status quo in every industry and companies are now increasingly automating what they do. So-called “intelligent technologies”1, are empowering workers to be more effective and efficient in their daily work—and freeing them from more mundane tasks to learn new skills. But while employing these technologies demands a fundamentally different approach to your workforce it can also mean a 50 percent boost in revenues according to our recent study – Reworking the Revolution2.

Intelligent technologies are particularly compelling for industries such as the oil sector, which has seen substantial workforce and investment reductions over the past few years. More than 400,000 jobs have been lost in the latest downturn in the oil and gas industry, the majority of those in the services sector3. These losses have added to longer standing workforce challenges, such as changing demographics (where the average age is over forty4) and where most workers are nearer to the end of their careers than the start.

More recent challenges include the rising demand for new skills and capabilities, with some “petrotechnicals” finding that their qualifications and skills do not match the descriptions of newer jobs and roles. Estimates show that by 2020, nearly 50 percent of the workforce will be Millennials, and Generation Z will also be entering the workforce5. These younger workers approach work differently to previous generations—and are more educated, more concerned about equality, less motivated by money, less loyal to a single employer and more task orientated. And, of course, they are tech-savvy.

From a revenue perspective, they’re correct. The Reworking the Revolution study shows that if all companies were to invest in intelligent technologies at the same level as the top performing one-fifth of companies, they could boost revenues by 38 percent and lift employment levels by 10 percent (between 2018 and 2022). That equates to an average of US$7.5 billion and 5,000 jobs for some S&P 500 companies. For energy, chemicals, natural resources and utilities companies (the resources industry), this revenue boost is higher—more than 50 percent with a corresponding rise in employment levels of 5 percent. (See Figure) 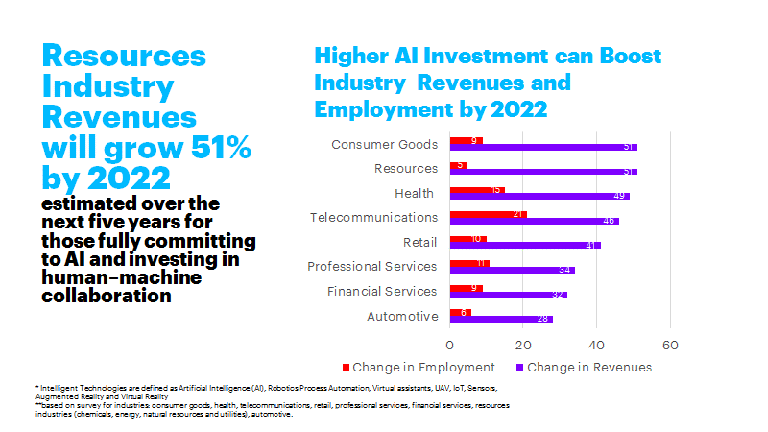 The new value not only comes from greater efficiencies and net job creation, but also from the ability of companies to implement technology combined with human ingenuity across all parts of their business to solve complex challenges, break into new markets or generate entirely fresh revenue streams. In the energy sector, nearly 60 percent of oil company leaders expect net new job gains from intelligent technologies over the next three years.

Some analysis, including that from the Brooking Institute7, shows that automation has created more jobs than it has destroyed in all industries due to increased productivity and consumer incomes which boost demand and employment. These technologies can free up workers from manual tasks and enable them to be retrained to program and use the new technologies, so, in effect, creating new jobs.

Three ways in which intelligent technology benefits can be achieved:

Reimagining the workforce is all down to the skills needed to stay ahead. An intelligent workforce can be more agile and better equipped for change—and will improve revenues for a more sustainable future. Which of four B’s—buy, build, borrow or bot—will constitute the optimal workforce mix for your company?