Future disruption: How the energy industry can move from volatility to value

In recent times, the oil and gas industry has been exposed to some major and long-lasting disruptions. The explosion of oil and gas production from the shale fields of North America, funded by private equity and accelerated by technical breakthroughs in shale drilling, has led to an oversupply of hydrocarbons and a downturn in global oil price. This “Big Bang” disruption has resulted in a major re-evaluation of future oil prices and energy resources and has been amplified by changes in energy demand, where new technology and substitutions are changing consumption patterns on a global and local basis.

The changing demand outlook follows the typical characteristics of a “compressive disruption,” which typically leads to period of “empty” growth before demand potentially stalls and then declines. It has been exacerbated by adjacent disruptions in transportation, power and materials manufacture, not to mention the rise of a connected and socially networked consumer.

Accenture has developed a Disruptability Index to better understand the current level of disruption in the industries we serve and their susceptibility to disruption in the future. We discovered that the energy sector sits high in the volatility quadrant, where historic strengths can become areas of weaknesses. Out of 20 industries assessed, the energy sector rated as the most susceptible to future disruption (See Figure) 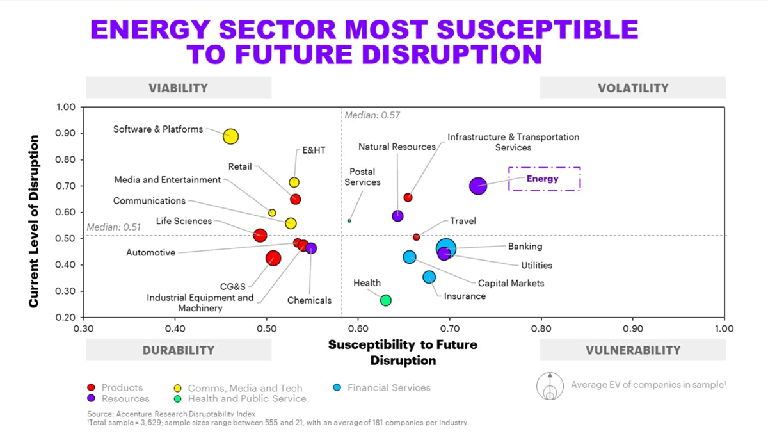 In assessing many industry dimensions where susceptibility can be reduced, we found three areas where the energy sector ranked poorly:

So far, the energy industry has seen relatively little disruption from new entrants. There has been no equivalent of an “Amazon” or “Uber” in the oil industry forcing incumbents to change their strategies and/or operating models, intensifying cost and efficiency pressures. The US independent oil companies have perhaps come closest, opening the US shale plays which has changed the supply curve and has also put pressure other operators to reduce their break evens. Furthermore, the intense regulation that characterises the energy sector generally has, up to now, made it harder for new companies to gain a foothold. But, this also means the energy industry has become complacent, exposing it to threats from new competitors slow to respond to change.

Pivot to the New

Industries are not simply at the mercy of disruption. The answer is not to stand still, but to position better, for example, by embedding efficiency and operational excellence (so the energy industry can maintain and grow its core business) while creating investment capacity (so energy companies can shift or pivot their business toward new opportunities)

Some oil companies have made a start, through increased digital investments, or a stronger focus on investment in a wider range of energy solutions. Many oil companies are making new investments in lower carbon or green energy. Shell, for example, is aiming to cut the net carbon footprint of its energy business by 20 percent by 2035 (50 percent by 20501) Statoil has announced that is changing its name to Equinor, to attract younger talent and to reflect the company’s growing diversity in the global energy system away from oil.2

As reported in Harvard Business Review, it is misconception that all disruption is random and beyond a company’s control. So, perhaps it is time for the energy industry to act and either build its defences against disruption or become the disruptor, before it’s too late.

Find out more about the Accenture disruptability index