Banking as a living business

January’s Banking Scene Conference in Luxembourg underlined the tectonic shift taking place in financial services. In this article, I share key insights from my keynote on how banks can adapt to new environments by becoming hyper-relevant.

The emergence of the platform economy driven by GAFA (Google, Apple, Facebook, and Amazon) has changed the way we choose, buy and even think. The financial services industry is not immune to this disruption. And the challenges it faces are being compounded by new banking entrants, which excel at fulfilling consumer expectations by offering brand new customer experiences.

A tectonic shift in the financial services

Although new banking entrants are not always well known to many consumers, their economic impact worldwide is considerable. Accenture research shows that while so-called ‘digital laggard’ banks lost on average 1% of their value from 2015 to 2018, ‘digital leaders’ gained 23% in value, FinTech gained 49% in value and GAFA, 57%.

Examples of successful FinTechs include N°26, which has gained 5 million customers since its launch in 2013, while Revolut (launched in 2015) is targeting 10 million customers by 2020. New partnerships between traditional bankers and technology companies are also on the rise. Apple has partnered with Goldman Sachs to issue the Apple Card. Amazon is in talks with Goldman Sachs to issue loans. The potential symbioses are numerous, ranging from the monetization of data to selling digital capabilities as a service.

The Belgian and Luxembourgish banking industry are also being drawn into this disruptive dynamic. New players such as LUXHUB are creating Open Banking opportunities thanks to their Application Programming Interface (API) marketplace. Many digital-only banks in Belgium are offering Apple Pay while it is not a standard for traditional players. Regulators are also contributing to this movement of change. Luxembourg’s Ministry of Finance granted an e-money license to Amazon in 2010 and to Alipay in 2019. The National Bank of Belgium (NBB) and the Financial Services and Markets Authority (FSMA) have entered the fray by establishing a platform enabling FinTechs to enter into direct contact with them. What’s the best way for banks to adapt to this new competitive arena?

Banking as a ‘living busines’ can adapt to this new environment

Accenture’s response is clear: banking should go beyond banking, by becoming “hyper-relevant”. This means embedding capabilities that will allow banks to morph in synchronization with a fast-changing competitive environment. These capabilities are inspired by the real-time customization already built by GAFA and FinTechs and a universe of customer-centric services that are considered as hyper-relevant in the eyes of consumers.

The transition to hyper-relevance can be achieved by applying Accenture’s wise pivot approach, unifying the three following steps: 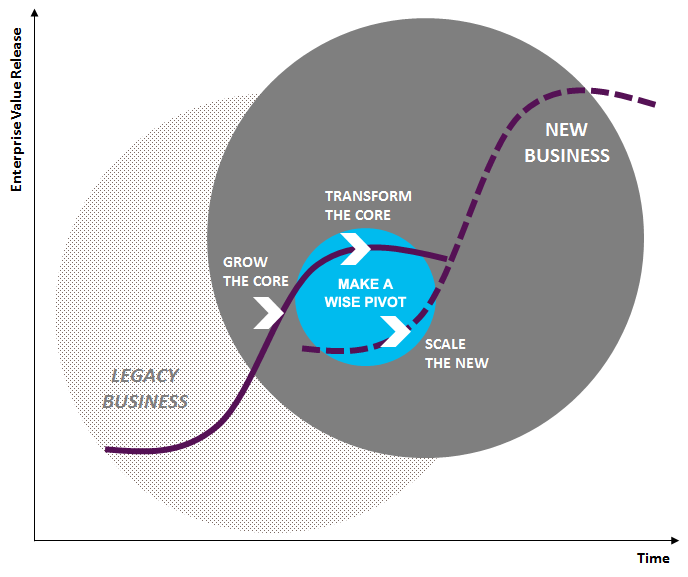 Just as GAFA and digital banks have blurred the boundaries between standardized digital experiences and new banking services, banks should propose products that go beyond their traditional offering. Banks need to reposition themselves on the market and rethink the way they serve their customers. There are currently three dynamic ways of doing this:

A bank becomes the platform orchestrator of an ecosystem of diverse partners. The platform bundles very diverse services together. N°26 is a great illustration of this concept: it has partnered with TransferWise for currency transfers, with Raisin for saving accounts, with Vaamo for investment solutions, Schufa for credit score calculations, Allianz for insurance products, and many others. All the solutions proposed by these actors are integrated in one application to offer a fluid and seamless customer experience.

Banking-as-a-Service extends services linked to a bank’s core products to partners and 3rd parties. For example, BBVA Group has partnered with Uber Mexico by leveraging its Open Marketplace to create a unique experience for unbanked Uber drivers when they are using Uber's app. The partnership consists of integrating BBVA’s API services within Uber's mobile app to provide drivers with a digital account as well as other useful tools (e.g. Mastercard debit card) to manage their finances in an easy and simple way. The success of this initiative cannot be denied: 35% of Uber's workforce in Mexico has opened an account within the app.

Becoming a digital leader requires heavy investments in terms of new (internal) capabilities. However, these investments can also yield returns if the new capabilities are translated into external services. This follows the trend increasingly blurred boundaries between businesses. CaaS sees banks becoming the authors and developers of purely digital programs. This is a higher degree of diversification than BaaS, despite the fact that these capabilities were initially created for purely banking purposes.

For example, Singapore’s DBS created the world’s largest API Developer Platform when it first launched in 2017, opening it to developers, FinTechs, established retailers and other financial services providers. Today DBS has more than 300 APIs and more than 90 B2B partnerships including household names such as AIG, McDonald’s (PayLah! Cashless payments), MSIG and PropertyGuru (mortgage assessment), as well as startups like Activpass, FoodPanda, Homage (rewards API), and soCash.

Disruption is seen as a threat by many financial services players. Accenture’s vision, informed by a pragmatic analysis of the market, is that a changing environment also represents a rich and fascinating opportunity to learn and diversify. Threats can be transformed into opportunities by whoever is able to identify new areas of growth and pivot wisely. Our objective is to help provide the core banking business with the capabilities it needs to continuously re-invent itself – as a living business – instead of punctually adjusting to the market.

Want to discuss how your bank can pivot wisely to the new and become a living business? Don’t hesitate to contact me for a chat!